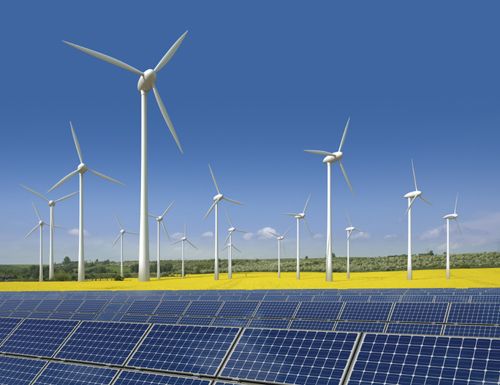 “The California Senate leader has introduced legislation that would require the Golden State to get 100 percent of its electricity from climate-friendly energy sources by 2045,” the Desert Sun reported[1]. “That’s a big step up from the state’s current renewable energy mandate, 50 percent by 2030 — a target that’s only been on the books for a year and a half, and that California is still a long way from meeting.”

“De León’s bill would require California to hit 50 percent renewable energy by 2025, five years sooner than under current law, and phase out fossil fuels entirely by 2045. It’s not yet clear whether the Senate leader will move forward the proposal, which he introduced before the state’s bill-filing deadline on Friday, almost certainly to serve as a placeholder for more detailed legislation that could be fleshed out later. Still, clean energy advocates celebrated the proposal.”

Massachusetts lawmakers recently made a bid to make their state the first in the country to draw all its power from renewables. “Lawmakers recently introduced a bill that would require an economy-wide transition to obtaining power via clean sources like wind and solar, and 53 state legislators from both the House and the Senate have shown support for the measure,” Inhabitat observed[2]. “The bill, SD. 1932, also known as the 100 Percent Renewable Energy Act, would set targets of electricity generation via 100 percent renewables by 2035; other sectors like transportation and heating would have until 2050 to make the switch.”

A few other states have begun to gravitate toward the principle of mostly or totally renewable power. New York “wants 50 percent renewable energy by 2030,” according[3] to the Los Angeles Times, “which is seeking 100 percent renewable energy by 2045.” De León first floated the idea of going full renewable to the Times in January. “Two years ago, California Senate leader Kevin de León pushed through a law requiring the state to generate half of its electricity from renewable sources by 2030,” the paper recalled.

But while the enthusiasm has largely been couched in terms of using politics to advance moral imperatives, not all green energy advocates have embraced the idea with open arms. “[T]here’s a lot of evidence that 100 percent renewable energy is not the optimal way to decarbonize the grid,” Greentech Media noted[4]. “Let’s say climate change requires massive government investment in clean technologies. In that case, the question shifts to one of efficacy: Since climate change justifies extraordinary measures, what is the most effective extraordinary measure to fight it? That’s where 100 percent renewables plans fall short, for both structural and practical reasons.”

Some analysts have warned that the approach pushed by de León becomes less and less effective the more ambitious it becomes. “The main economic problem facing renewable electric power is that of diminishing returns,” wrote[5] the Niskansen Center’s Edwin Dolan. “It is possible to install great numbers of solar panels and wind turbines, and even to achieve economies of scale, measured in terms of the cost per kilowatt-hour of capacity, as the installations get larger. However, the problem remains of getting the power to users where and when it is needed. The output of solar and wind installations is variable, and the timing of output does not always coincide with the timing of demand. As the number of renewable installations attached to the grid goes up, the percentage of the potential power output that can actually be used goes down and the cost per kWh rises.”

The result could lead businesses to push technology toward arbitrary goals. “Energy companies have traditionally shied away from installing battery systems at their plants because they’ve tended to be expensive,” Ars Technica noted[6]. “But as prices for energy storage come down and states like California require more and more intermittent renewable energy on utilities’ grids, battery installations have been on an upswing.”