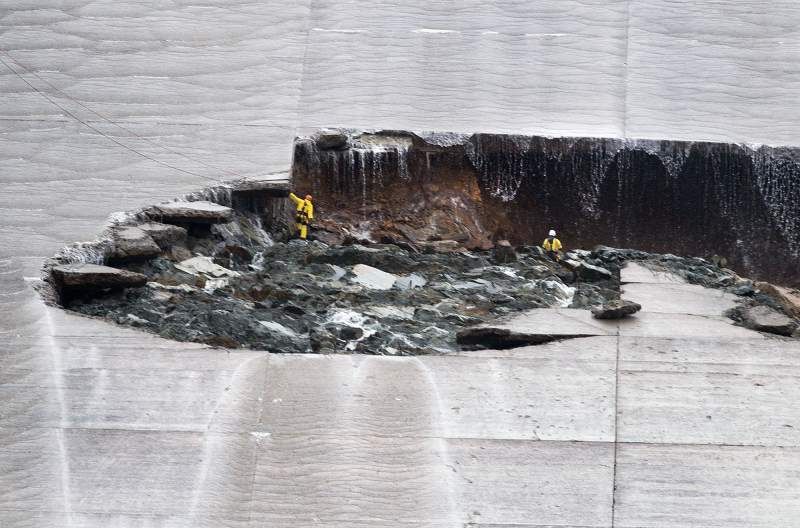 “Putting the price tag of California’s brutal winter storms at $569 million, Gov. Jerry Brown asked President Trump […] for a fourth federal disaster declaration to help speed up recovery and repairs across the state,” the Los Angeles Times noted[1]. “The estimate of damages, a number calculated jointly by state and federal teams, was accompanied in Brown’s letter by a long list of storm damage that left Californians fleeing flood waters and a number of roadways damaged by slipping hillsides and erosion.”

Despite some friction between Brown and Trump over changes to federal law that could cut against the grain of state Democrats’ priorities, the president hasn’t hesitated to grant the governor’s wishes for relief. “Brown’s request for a federal disaster declaration follows three similar requests this winter amid widespread weather-related damage. The three earlier appeals were granted, expediting assistance for flooding, problems on roads and bridges and other issues,” the San Francisco Chronicle recalled[2]. “The Governor’s Office of Emergency Services has also requested assistance from the U.S. Small Business Administration for individuals in Colusa, Lake, Lassen, Plumas, Santa Clara and Santa Cruz counties, where the flooding from February storms damaged more than 200 homes and businesses.”

The most recent grant came mid-month, in the midst of Brown’s latest request. “President Donald J. Trump declared a major disaster exists in the state of California and ordered federal assistance to supplement state, tribal and local recovery efforts in the areas affected by severe winter storms, flooding and mudslides from January 18 to January 23, 2017,” the White House announced[3].

Visiting FEMA acting administrator Bob Fenton in D.C., Brown struck a conciliatory tone, but limited it sharply. “Brown, who put the storm damage at well over $500 million, said he came away from the meeting feeling positive after being told that Trump is ‘very concerned’ about disaster relief for California,” according[4] to the Sacramento Bee. “But Brown also stood by his recent denouncement of the Trump administration’s decision to review federal greenhouse gas standards, a move the governor recently characterized as “an unconscionable gift to polluters.”

Brown’s posture chimed closely with public sentiment in the Golden State. “Fifty-three percent of California voters say state leaders should try to work with Trump on areas of disagreement, even if it requires compromises, while 47 percent of voters say California leaders should oppose the president even if it risks losing federal funding to the state,” according to a poll conducted by the Institute of Governmental Studies at UC Berkeley and reported[5] by Politico. “The preference for compromise comes despite Trump’s deep unpopularity in California,” the site added. “Yet in two major areas — the economy and jobs and improving roads and infrastructure — more Californians say Trump administration policies will have a positive than negative effect.”

Previously, the administration joined a broader effort in Washington to reckon with the consequences of California’s sometimes crumbling infrastructure. “Trump declared a presidential emergency during last month’s crisis at Oroville Dam,” the Sacramento bee noted[6]. Meanwhile, on Capitol Hill, lawmakers broadened their view of similar challenges nationwide. “The recent events at the Oroville dam in California, together with ice jam flooding on other major waterways and other flooding events, has forced the Environment and Public Works Committee to take up the status of U.S. dam, levee and other flood control infrastructure,” the Washington Examiner reported[7]. “The new chairman of the committee, Sen. John Barrasso, R-Wyoming, has made infrastructure development a top issue for the panel this Congress, in light of President Trump’s focus on infrastructure and job development.”