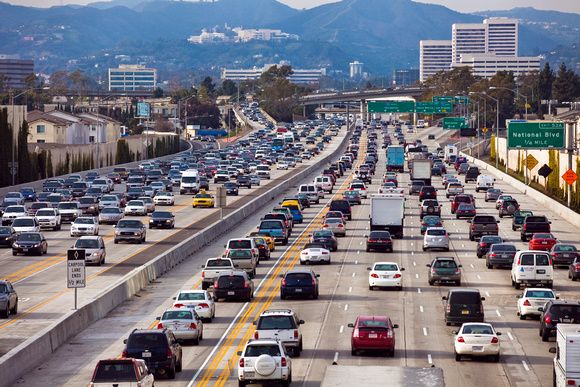 Gov. Jerry Brown and Democratic legislative leaders continued their push Friday for quick approval of higher vehicle taxes and fees to pay for a 10-year, $52 billion plan to upgrade California’s roads and highways with the release of legislative language for two bills that appear to answer concerns that new revenue might be diverted to the general fund or used for the state’s embattled bullet train project.

Proposition 42[3], passed in 2002, said sales taxes on fuel could not be used for anything but transportation purposes. But it allowed the money to be diverted on a two-thirds vote of both the Assembly and Senate.

After two diversions in subsequent years, voters in 2006 approved Proposition 1A[4], a constitutional amendment that said future diversions were OK in times of financial crisis, but would be treated as loans that had to be repaid.

In 2010, however, Gov. Arnold Schwarzenegger and the Legislature orchestrated a scheme to unencumber vehicle fuel sales tax funds that was based on a legal opinion that it was OK to adjust both sales taxes and excise taxes on vehicle fuel without overcoming the normal obstacles to tax hikes if the changes were revenue-neutral.

The scheme sharply cut fuel sales taxes and sharply increased fuel excise taxes, which were not subject to Proposition 1A protections. This allowed $1.8 billion in fuel excise taxes to be used to pay off previous transportation bonds instead of using general fund dollars.

SCA 2 and ACA 12 would forbid the use of new revenue for such bonds approved on or before Nov. 8, 2016. This provision would also prevent funds from being directed to the California High-Speed Rail Authority’s $64 billion project, original approved in 2008.

Here are the key details of Brown’s proposal, which targets an estimated $137 billion maintenance backlog on local and state roads and highways:

To become law, the two bills need two-thirds support from both the Assembly and Senate, meaning Brown, Assembly Speaker Anthony Rendon and Senate President Pro Tem Kevin de Leon either need some Republican votes or no Democratic defections. They hope to have finals votes taken by Friday, April 6.

Republicans rip plan — and some Democrats may as well

That looks to be a tall task. Assembly Republican Leader Chad Mayes of Yucca Valley appeared to speak for most or all GOP lawmakers when he ripped Brown’s plan, telling reporters[5], “The state government has mismanaged our transportation system now for decades and the only answer, the only response to that, is that the Democrats — the ruling party here in California — want to raise taxes.”

Meanwhile, in an era in which California Democrats’ hostility to fossil-fuel vehicles keeps building, the new fee on zero-emission vehicles and the divvying up of the $52 billion in new revenue is likely to rankle some. The package’s overwhelming focus is on road and highway improvements; $7 billion would go to mass transit and local public transit systems and $1 billion to new bicycle lands and pedestrian projects.

What happened in San Diego County in the Nov. 8 election could be telling. Measure A[6], an $18 billion program which would have used sales taxes to fund transportation improvements, was crafted by the San Diego Association of Governments with an eye toward winning over environmentalists. Transit and bicycling projects and improvements were to get $8.94 billion of funding, just under half.

That suggests some green California Democrats may not be happy with transit and bicycling only getting a 15 percent cut of Brown’s $52 billion package.