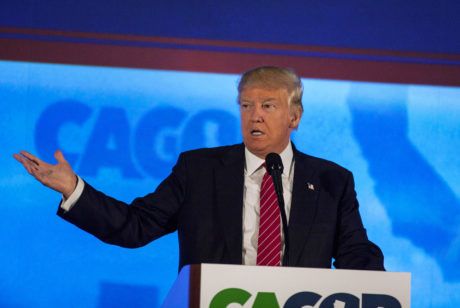 Because among the deductions Mnuchin seeks to zero out is one that allows taxpayers to deduct state and local taxes from their federal taxable income, some coverage is framing it as a way for Trump to punish liberal “blue” states[2] that both have among the highest state taxes and which voted heavily for Hillary Clinton.

This list starts with California, New York and New Jersey. Yet the notion of this being some sort of partisan payback has a twist: Some of the 28 House Republicans from the three liberal states could be as likely to resist the targeting of the deduction as House Democrats. The Committee for a Responsible Federal Budget estimates that Californians would have to pay some $10 billion[3] more in annual income taxes without the deduction, the most of any single state.

But other provisions of Trump’s tax plan, such as doubling the standard deduction, would minimize the hit on those making under $100,000 and very affluent taxpayers would stand to gain from the killing of the alternative minimum income tax.

While trying to figure out how the framework might help or hurt their districts, so far California’s 14 House Republicans have generally stayed out of the tax fray.

But not Republicans in other blue states. Rep. Chris Collins, R-New York, said he opposed ending the deduction. He told Bloomberg News[4] he saw his decision not as being about partisanship or helping or hurting Trump but as about whether he would “stand up for New York.”

New York and New Jersey don’t have Proposition 13-style protections against rapidly rising property taxes, as California does. Being able to deduct property taxes from federal income helps lessen the blow of soaring real-estate values, Rep. Tom Reed, R-New York, told Bloomberg. Reed said he was open to Trump’s plan but wanted to know more about how it would affect his state.

But the property-tax deduction still saves California billions, according to Tax Foundation estimates. Even though increases in annual property taxes are capped by Proposition 13 at 2 percent, the state still has the 17th highest effective property tax rate, according to[5] wallethub.com.

Mnuchin’s main argument for a much simpler tax code with lower rates – that it would lead to explosive growth – echoes a tax-policy debate nearly a decade ago at the state Capitol.

In late 2008, Gov. Arnold Schwarzenegger appointed a high-profile group of academics, business figures and politicians to serve on his Commission on the 21st Century Economy[6]. The bipartisan panel – chaired by Rancho Santa Fe investor Gerald Parsky – produced a report[7] in September 2009 that sought the creation of a much simpler tax code with lower income taxes that addressed the state’s traditional reliance on volatile capital-gains tax revenue by broadening what could be taxed to include services.

Parksy depicted the proposed tax code as the first in history designed specifically to promote economic growth by removing tax provisions that encouraged tax avoidance and discouraged attempts to expand business operations. He stressed it would be initially revenue-neutral before eventually producing what he said would be a tax revenue bonanza.

What happened next suggests the difficulty Trump could face in getting House and Senate majorities for sweeping tax reform. Despite high-profile support from Schwarzenegger and former Treasury Secretary George Shultz on the right and former Gov. Gray Davis and UC Berkeley author-professor Christopher Edley Jr. on the left, the proposal was dead on arrival[8] in the Legislature.

Democrats couldn’t stomach its income-tax cuts for the rich. Republicans didn’t like new taxes on services and feared that attempts to overhaul the state tax code could be hijacked in the Legislature as a way to sharply increase taxes as state revenue plunged during the Great Recession.

Trump’s framework wouldn’t add a broad new category of taxes, so it may fare better than Parsky’s plan did with Republicans. But the harsh reception the California plan got reflects the leeriness about changing the status quo of taxation among powerful vested interests. That’s one reason that Congress hasn’t made a serious effort at tax reform in more than a generation – since the 1986 package[9] pushed through Congress with the guidance of Reagan White House Chief of Staff James Baker and House Ways and Means Committee Chairman Dan Rostenkowski, D-Illinois.