Paid to protest the president? Bay Area employees get days off for civic engagement

While many conservative claims about paid protesters demonstrating against President Trump have been met with skepticism and dismissal — in the Bay Area — some of them might actually be getting money for being there.

Companies in the region are increasingly offering their employees paid time off to participate in protests, marches and other demonstrations as part of civic engagement policies.

“Democracy is a participatory institution; it’s not just something that takes place every four years when you have a candidate in a race,” Adam Kleinberg, CEO of San Francisco ad firm Traction, told[1] the San Francisco Chronicle.

The company gives its workers two paid “Days of Action” per year. 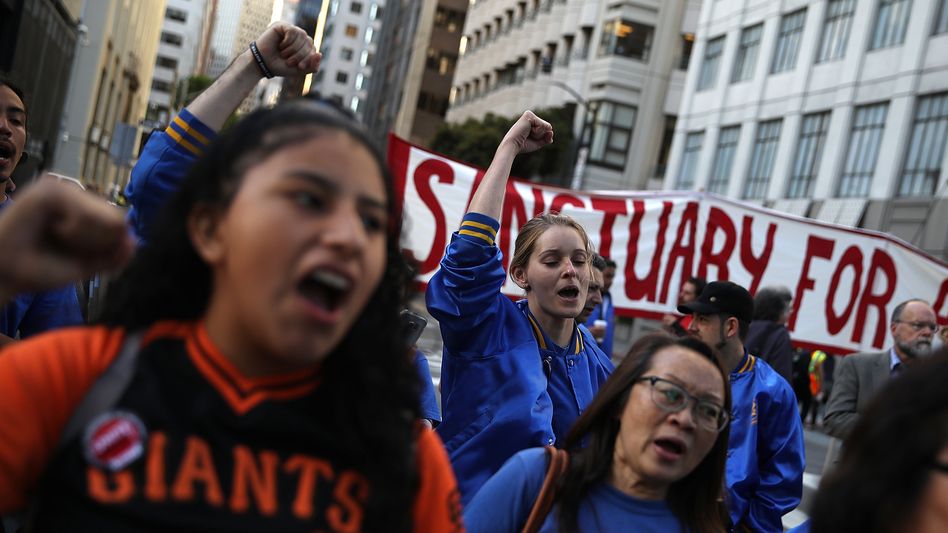 Furthermore, tech giants like Facebook[2] recently allowed their employees to take a day of paid leave to participate in the May Day immigration rights demonstration in San Francisco — a rally that was largely a protest of Trump’s agenda.

“At Facebook, we’re committed to fostering an inclusive workplace where employees feel comfortable expressing their opinions and speaking up,” a spokesman explained in an emailed statement. “We support our people in recognizing International Workers’ Day and other efforts to raise awareness for safe and equitable employment conditions.”

Major tech figures like Facebook COO Sheryl Sandberg[3], Google CEO Sundar Pichai and co-founder Sergey Brin have all spoken out against the president, illustrating this administration’s frosty relationship with the industry.

And even those who showed a willingness to work with the White House have faced a wave of scrutiny. For example, Uber CEO Travis Kalanick resigned[4] from the president’s business advisory council earlier this year after facing intense backlash, seeing #DeleteUber trend at the top of Twitter over his decision to offer guidance on a job growth agenda.

The policies appear to reflect a growing discontent in the heavily liberal region that Trump presents more than just policy differences — but an existential threat to their well being and daily life.

“It’s a recognition of the fact that civic engagement is something that we should be doing not just as individuals but as a company,” Buoyant CEO William Morgan told[5] CS Monitor about his software company’s policy. “I wanted to make it more clear that we could not be passive citizens in this world.”

While the policies aren’t new — as companies like Comcast have been offering such leave for years — they appear to be taking on new life in the Trump era.

“People were wishing that I was dropped off in an (Islamic State) territory, calling me an idiotic libtard, candy-ass, saying they hope we’ll go out of business. Really nasty stuff,” Kleinberg told the Chronicle about the backlash to the policy.

Overall, Trump’s policy proposals have been met with a particularly strong response in Silicon Valley due to his stance on issues like the controversial H-1B visa program that tech companies say they rely on to recruit top talent — but one critics say comes at the expense of American workers.

And the president’s rhetoric may be having some effect, as the number of H-1B applications dropped[6] to under 200,000 in 2017 — a 15 percent decrease from a year earlier.