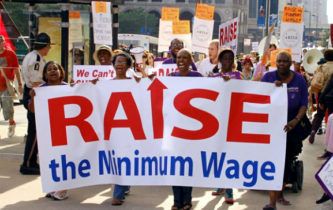 In 2013, to shore up support for a plan to rapidly increase Seattle’s minimum wage, city leaders agreed to let a team of University of Washington researchers have access to troves of confidential payroll information so they could evaluate whether the wage hikes were helping or hurting low-income hourly workers.

The decision came as similar debates were playing out in California over state leaders’ decision to phase in their own long-term minimum-wage hike, from $8 in 2014 to $15 in 2022, with businesses and some economists warning of unintended consequences.

In July 2016, as Seattle was on its way to raising the minimum wage from $9.47 in 2014 to $15 in 2017 – a 58 percent hike – the UW report[1] came out and painted the effects of the 2015 increase to $11 as being minimal. This prompted sighs of relief from the business community and cheers from supporters of the wage hike plan. Most reviews of previous modest minimum wage hikes had similar results.

But the release of an updated report[2] on Monday offered a much grimmer picture. It found that after the minimum wage reached $13-per-hour last year, employers began cutting low-wage jobs and limiting hours to such an extent that the average minimum-wage employee lost about $125 a month despite higher hourly pay. This has led both to I-told-you-sos from economists who had warned that huge wage hikes could backfire and to sharp attacks on the study, in California as well as the state of Washington.

“Their findings are not credible and drawing inferences from the report [is] unwarranted,” UC Berkeley economist Michael Reich told [3]the Los Angeles Times. Reich was co-author of a study [4]of Seattle’s minimum-wage hike released last week by UC Berkeley’s Institute for Research on Labor and Employment that reached much more upbeat conclusions about the Seattle experiment.

Several economists cautioned against leaping to conclusions about a study that had not yet been peer-reviewed. They also warned of not disregarding past research that reached different conclusions and pointed out arguable shortcomings in the UW study’s methodology.

But in some academic quarters, the reputation of the University of Washington researchers and the sheer volume of evidence they had on how Seattle labor markets were functioning produced strong defenses of the study – and criticism of those who were quick to trash the report[5].

“This strikes me as a study that is likely to influence people,” MIT economist David Autor told the Washington Post after reviewing its findings. He said he found it “sufficiently compelling in its design and statistical power that it can change minds.”

In a Facebook post[6] shared far and wide on the popular Marginal Revolution website[7], Texas A&M economist Jonathan Meer praised the comprehensiveness of the research and joined Forbes magazine in knocking the credibility [8]of the UC Berkeley labor center, saying its “previous work on the minimum wage is so consistently one-sided that you can set your watch by it, that unsurprisingly finds no effect.”

Meer also said it was no accident that the labor center and Seattle City Hall released the upbeat report before the downbeat report was released,  knowing it would get national attention[9].

“I find that whole affair abhorrent. Seattle politicians are so unwilling to accept reality that they’ll undermine their own researchers,” Meer wrote. “I don’t envy the backlash this team is going to face for daring to present results that will be seen as heresy. I know that so many people just desperately want to believe that the minimum wage is a free lunch. It’s not.”

Several California cities have raised or are in the process of raising their minimum wages even faster than the state, including Los Angeles and San Francisco. So far, these local efforts haven’t been evaluated with the thoroughness of the University of Washington’s survey of Seattle’s job market.