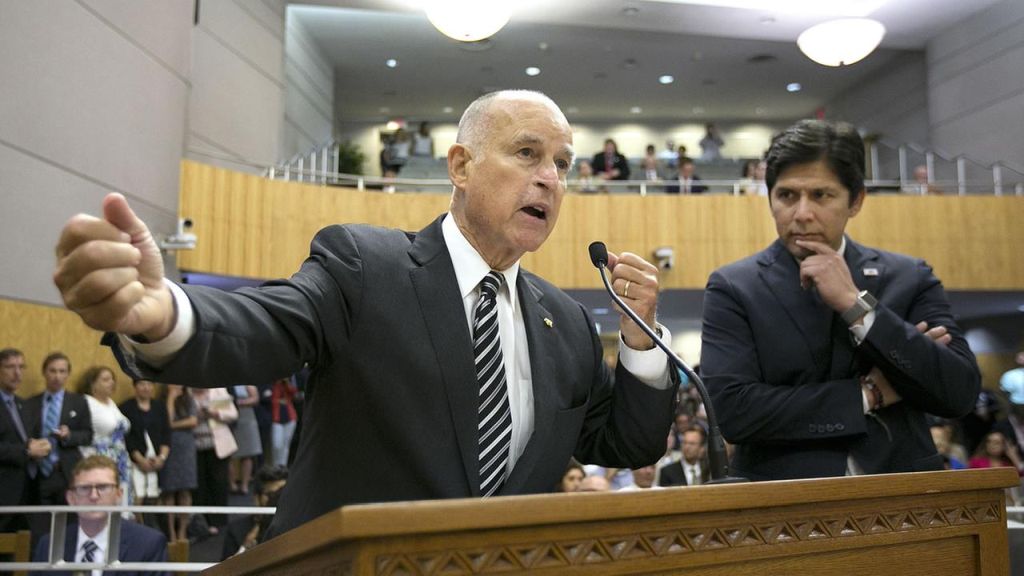 SACRAMENTO – As the California Legislature approached a late-night Monday vote to extend the state’s climate-change-fighting cap-and-trade system, the Capitol buzz[1] focused on Jacqui Irwin of Thousand Oaks. The Democratic assemblywoman was absent because of a long-standing family commitment, thus leaving Democrats one vote shy of the supermajority they needed to approve the system’s 10-year extension.

The Senate was less of a question, given that Democrats have a full supermajority in the upper house. As it turned out, the Senate passed the measure – and a companion bill that strengthens air-pollution reporting requirements – with all Democrats in support, as well as one Republican, Tom Berryhill of Modesto, who gained a concession[2] (reduction of a firefighting fee for rural areas) he had sought.

But the Assembly vote wasn’t even close[3], as seven Republicans – including Republican Leader Chad Mayes of Yucca Valley – voted in favor of the extension. The other six Republicans were Catharine Baker of Walnut Creek, Rocky Chávez of Oceanside, Jordan Cunningham of San Luis Obispo, Heath Flora of Modesto, Devin Mathis of Visalia and Marc Steinorth of Rancho Cucamonga.

Mayes defended his vote, first by expressing how tired he is of partisanship, then noting that he supports cap and trade because “we believe markets are better than Soviet-style regulations.” He also posted on Twitter[4] a large photo of Ronald Reagan with a recent quotation from former Reagan Secretary of State George Schultz: “Passing this bill on a bipartisan basis … is something Ronald Reagan … would be proud.” But despite his appeal to conservative icons, conservative activists and commentators were furious at the vote.

In a column Tuesday[5], Jon Fleischman, publisher of the Republican website Flashreport, ridiculed Mayes’ contention that the cap-and-trade system is a free-market approach to climate change: “Apparently Mayes believes that when the government creates Soviet-style limits on resources but leaves people with the freedom to exist in a world of artificial scarcity on their own terms, that is not command and control.”

Conservative former Assemblyman Tim Donnelly[6] noted in an email blast that eight GOP legislators “voted for a (63 cents) per gallon gas tax, handing Gov. Jerry Brown another victory and a massive slush fund to spend on things like high-speed rail.” That number comes from the nonpartisan Legislative Analyst’s Office, which concluded that the cap-and-trade system could add 63 cents to a gallon of gasoline by 2021 if carbon credits sell for a high price.

Under cap and trade[7], established in 2012 by the California Air Resources Board and authorized by the Global Warming Solutions Act of 2006, the state caps allowable greenhouse-gas emissions by manufacturers. That cap then is reduced by 3 percent a year. Manufacturers who cannot reduce their carbon emissions immediately bid for “credits” in an auction system. The goal is to force companies to invest in low-carbon technologies, but the costs of the credits and those investments are expected to drive up costs in the meantime.

Some business groups[8] backed the program, viewing it as a less-onerous means to achieve climate-change goals than the heavy-handed regulatory alternative. Some environmental and social-justice groups opposed the plan, which they view as going too easy on corporations. But few doubt that its passage will increase gas, food and electricity prices.

The issue is a hot button now[9], given that Republicans are targeting Democratic Sen. Josh Newman, D-Fullerton, because of his vote in favor of Senate Bill 1, a recently passed law that increases gasoline taxes by 12 cents or more a gallon and which also increased vehicle-license fees to pay for transportation projects. Most Republican legislators objected to a cap-and-trade driven gas-price hike so soon after this tax increase.

Because of the relatively large number of Republican votes for the cap-and-trade extension, the Democratic Assembly speaker “was able to let three of his targeted members, who are occupying seats the GOP would like to pick back up, either not vote at all or vote no,” added Fleischman. He called it a “a big strategic blunder” for the Assembly GOP.

It’s unclear whether the GOP legislators will suffer a political price for their vote. Berryhill is termed out of his Senate seat. “Because of the manner in which the party is currently run and funded, those legislators who voted for the bill will not be punished in any way by the party,” said Tom Del Beccaro[10], former California Republican Party chairman. “However, as (former Assemblyman) Eric Linder proved with his liberal voting record and loss due to low Republican turnout, Republican voters will be less likely to turn out for Republicans next fall.”

Chávez noted[12] that “we’re a very small component of the world on this but that doesn’t mean we shouldn’t be leaders on something that’s threatening the world.”

It remains to be seen whether the GOP[13], which was making political hay out of the recent gas-tax vote, can keep up its political momentum now that so many of its members voted for bill that may raise gas prices by far more than 12 cents a gallon.