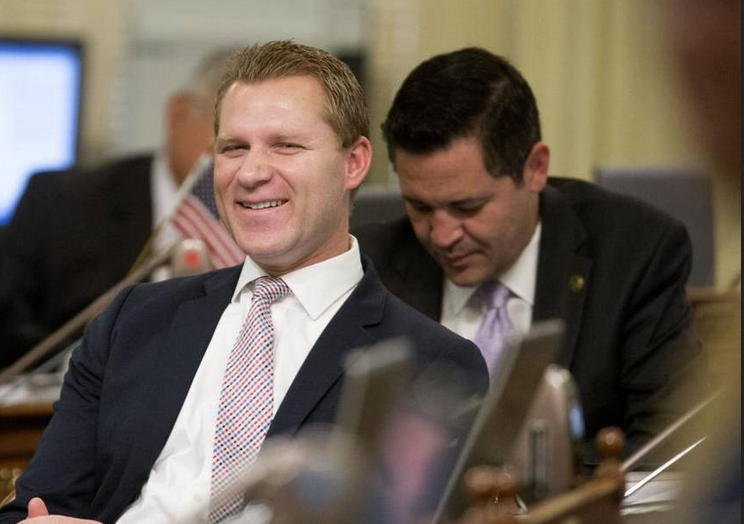 Assembly Republican Leader Chad Mayes, R-Yucca Valley, survived a bid to oust him [1]on Monday night at a caucus of the 25 GOP Assembly members in Sacramento. Ten Republicans voted for his removal, three short of a majority.

Nevertheless, anger over Mayes’ decision to work with Gov. Jerry Brown last month and lobby fellow Republicans to help secure an extension[2] of the cap-and-trade program established by AB32 – the state’s landmark 2006 anti-climate change law – remains intense among some lawmakers and many conservative activists. Another challenge to Mayes’ leadership is expected at an Aug. 29 caucus at which an election will be held to determine who leads the Assembly GOP.

Mayes’ decision to vote for the cap-and-trade renewal, and to work to bring several GOP lawmakers with him, came after weeks of negotiations with the governor. He believed he had won a major concession from Brown and Democratic legislative leaders that could eventually throttle the state’s costly, problem-plagued bullet-train project. Here’s a description from CalWatchdog coverage[5] last month:

The concession ….  places a constitutional amendment drafted by Mayes before state voters in June 2018. If passed, it would lead to a one-time up-and-down vote in the Legislature in 2024 on whether to continue allowing the use of cap-and-trade revenue to fund the project. But the threshold wouldn’t be a simple majority. A two-thirds vote would be required to allow continued use of the funds – presumably giving GOP lawmakers a prime chance to pull the plug.

But the complexity of the concession and its distant possible payoff didn’t enthrall many Republican lawmakers, whose opposition to AB32 is a core element of their political platform. There was also fury that Mayes rounded up so many Republicans that Democrats didn’t have to pressure two of their Assembly members in swing districts to vote for a cap-and-trade extension that is unpopular with their constituents. AB398 passed 55-25, with one vote more than necessary to meet the two-thirds threshold for adoption.

Meanwhile, an argument that Mayes has increasingly made in recent weeks – that AB398 provided state GOPers with a chance to rebrand themselves and broaden their appeal – has faced ridicule from those who say the party’s core values are opposition to higher taxes and overregulation.

Mayes’ rough month continued last Friday, when the board of the state Republican Party voted to urge[6] Mayes to step down. The vote was 13-7, with one abstention. State GOP chair Jim Brulte was among the yes votes.

Mayes, 40, has worked as a financial planner. He entered politics on the Yucca Valley Town Council and also worked as a top aide to a San Bernardino County supervisor. He was first elected to the Assembly in 2014.