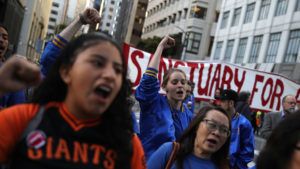 The California Legislature enters the final week of its 2017 session with ambitious measures on immigration, renewable energy and housing still up in the air.

One – SB54[1] – would put relatively strong limits on how much local and state law enforcement agencies could cooperate with the U.S. Immigration and Customs Enforcement branch of Homeland Security and other federal immigration authorities.

Labelled the “sanctuary state” bill by critics and de Leon[2] alike, it passed the state Senate in March. But law enforcement officials’ concerns have won a friendlier reception in the Assembly, where the bill appears stalled despite approvals from three committees. Some sheriffs have warned the bill would put California on a collision course with Attorney General Jeff Sessions and the U.S. Justice Department, which has already acted to withhold funds from “sanctuary cities” on the grounds that the federal government alone sets immigration policy.

Sessions’ recent announcement that the Deferred Action for Childhood Arrivals program would end in six months could give fresh fuel to the “sanctuary state” bill. Under the program, an estimated 200,000 California youths who were brought here as children have some legal rights. Protecting this group from deportation or other negative consequences has been a priority of state Democrats since Trump’s election last November.

Another high-profile de Leon bill[3] also passed the Senate in May before facing a cooler reception in the Assembly. SB100 would set a goal for state utilities of having 60 percent of their electricity generated by renewable sources by 2030 – up from the present goal of 50 percent – and require utilities to plan to be 100 percent renewable by 2045.

While the measure has passed three Assembly committees, most recently the appropriations panel on Sept. 1, its future may depend on whether Gov. Jerry Brown provides a last-minute boost. Utility lobbyists say the state is already making perhaps the biggest gains of any large state in shifting to renewable energy and that they don’t need a further push by Sacramento.

The first – SB3[4] by Sen. Jim Beall, D-San Jose – won some Republican support when it passed the Senate. It would ask California voters to approve $4 billion in general obligation bonds next year to pay for construction of affordable rental housing and “smart growth” projects near transit hubs and to revitalize the state’s veteran home loan program, which is expected to use up all of its present funding at some point in 2018.

SB3 was initially expected to be approved late last month. Reports over the weekend suggested[5] that delays may be because of the desire to package SB3 as part of a comprehensive deal that could rescue the second high-profile housing bill – SB2[6] by Sen. Toni Atkins, D-San Diego. To generate an estimated $250 million a year in reliable, permanent funding for affordable housing projects, it would increase fees by $75 on some real-estate transactions.

Because it is a fee hike, it needs two-thirds support from both houses to advance to Brown’s desk. In July, it passed[7] the Senate with the bare minimum of 27 votes. But insiders have been skeptical for weeks that the measure can get the 54 votes necessary to pass the Assembly. No Republican Assembly members back the bill, meaning all 54 Assembly Democrats would have to be yes voters for it to advance.

A Los Angeles Times report[8] last month suggested that was unlikely because some Assembly Democrats in swing districts didn’t want to vote for a measure that could be depicted as a tax hike after having already voted to raise fuel taxes earlier this year.