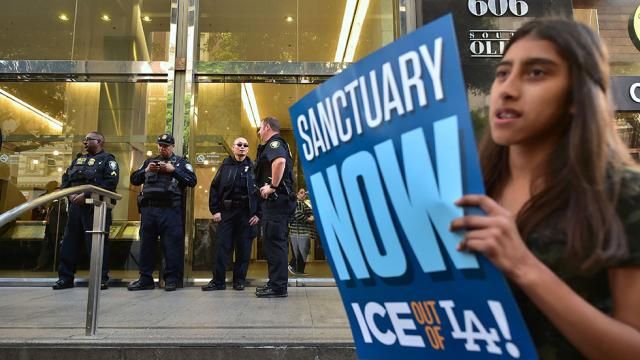 Gov. Jerry Brown and Senate President Pro Tem Kevin de León, D-Los Angeles, reached a compromise on the state’s “sanctuary state” bill this week, in a deal that amends the legislation to expand the ability of law enforcement to cooperate with federal authorities.

The amended Senate Bill 54 “prevents our state and local law enforcement resources from being diverted to tear families apart. California will protect our communities from the Trump administration’s radical and hateful immigration policy agenda,” de León said in a statement.

As part of the compromise, under the revised SB54, police can share information with federal authorities about inmates convicted of hundreds of crimes that were not part of the original language. These crimes include serious or violent felonies, felony drunk driving, unlawful possession of a deadly weapon and felony drug crimes.

But the bill still prohibits law enforcement from inquiring as to a person’s immigration status, detaining suspected illegal immigrants for ICE, and from acting as federal immigration agents.

“This bill protects public safety and people who come to California to work hard and make this state a better place,” Gov. Brown’s statement read.

Under the amendment, federal agents will be permitted to interview suspected illegal aliens in jails and to access state databases – actions that were previously prohibited.

The California Sheriffs Association still opposes the bill, despite the changes, believing it puts too great of a barrier between local enforcement and federal authorities.

Activists on the left largely praised the agreement. Pablo Alvarado, executive director of the National Day Laborer Organizing Network, called the deal a “victory for migrants,” according to the Sacramento Bee[1].

The bill must still be passed by the state Assembly.

SB54 comes amid a larger national debate about “sanctuary” policies, with conservatives and many law enforcement groups maintaining that they provide a safe haven for violate criminal aliens, while liberals and immigration activists argue the so-called “sanctuaries” encourage undocumented aliens to cooperate with police without fear of deportation.

The bill could also be a model for other states eager to push back against the Trump administration’s immigration crackdown.

For California, it’s just the latest act of defiance against the Trump agenda in Washington, as Attorney General Xavier Becerra on Monday sued the administration over its decision to rescind the Obama-era Deferred Action for Childhood Arrivals, arguing that doing away with the order violates the Fifth Amendment’s Due Process Clause, citing fears that the administration may use “Dreamer” data to find and deport them.

However, President Trump has said there will be “no action” to that effect for six months as Congress attempts to craft a legislative fix.

“I think everyone recognizes the scope and breadth of the Trump decision to terminate DACA hits hardest here,” Becerra said.

About one quarter of the 800,000 recipients of DACA live in the Golden State.