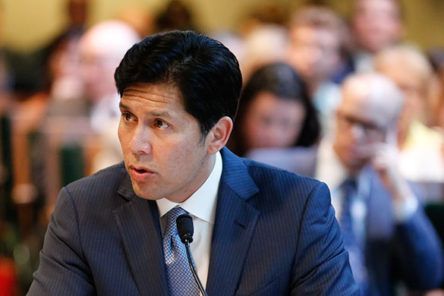 From pioneering air-pollution control programs in Los Angeles County in the 1940s[1] to setting nationally copied [2]standards on fuel efficiency and emissions to the 2006 passage of AB32, the state’s landmark anti-global warming law, California has long been proud of its role as a global leader in environmentalism.

So when Senate President Pro Tem Kevin de León introduced Senate Bill 100[3] in January, the expectations were high. The measure committed California to generating 50 percent of electricity from renewable sources by 2026 – four years earlier than the present goal – and to 60 percent by 2030 and to 100 percent by 2045. No government remotely as large as California’s had made such a commitment.

In spring interviews with reporters at an energy conference in Orange County, the Los Angeles Democrat depicted his bill as a common-sense measure[4] to goad investor-owned utilities into making long-term shifts in their infrastructure to prepare for an all-renewable future. He said progress had been so quick that he expected the state to meet the 50 percent renewable standard “in the early 2020s without breaking a sweat.” But he also depicted SB100 as setting up[5] “the most ambitious program in the world.”

When it passed the California Senate on a mostly party-line vote in May, the world took notice. The New York Times set the tone: In a 2,100-word analysis [6]headlined “Fighting Trump on Climate, California Becomes a Global Force,” it depicted the bill as a key part of California’s determination to take over the global lead in environmentalism from Washington.

But earlier this month, SB100 failed to even get a floor vote in the Assembly as lawmakers wrapped up business for the year. A Desert Sun report [7]depicted the decision as “unexpected.”

That’s not how it looked to some insiders. Business groups spent months hammering home the argument that it was risky to commit to 100 percent renewable energy use when it was not clear that was either feasible or safe for a modern economy. In a June interview with the San Diego Union-Tribune, Gary Ackerman, executive director of the Western Power Trading Forum[8], depicted SB100 as “reckless” and with a huge downside. The arguments echoed those made by Pacific Gas & Electric, Edison and San Diego Gas & Electric, the state’s three giant investor-owner utilities, which quietly have established strong ties with Democratic lawmakers in poor districts buffeted by high energy costs.

Meanwhile, de León didn’t enjoy unified support on the Democratic front. An argument the utilities had been making – that SB100 was potentially a hugely disruptive force – was adopted and modified by some labor leaders. They worried what a 100 percent commitment to renewable energy might mean for thousands of union members. According to an NBC News report[9], the International Brotherhood of Electrical Workers, Local 1245, began opposing the bill in late summer because the local union alleged de León had gone back on his promise to protect union jobs.

But a third factor may also have been at play. De León has never enjoyed the broad goodwill [10]accorded his predecessor, Darrell Steinberg, now the mayor of Sacramento. Soon after taking over as Senate leader in late 2014, de León was the target of a scathing column [11]by then-Sacramento Bee pundit Dan Walters for mistakes, power plays and a lack of humility. He faced similar criticism [12]from the Sacramento Bee’s editorial board.

De León has since emerged as a legislative powerhouse, at least according to the conventional wisdom that holds that the 2017 session was one of the most productive in recent history. But his clout couldn’t overcome the late-emerging opposition to SB100.

The lobbying will begin all over again for the measure in January, the Greentech website reported[13].

“We’re going to be back next year,” said Peter Miller, Western energy project director at the Natural Resources Defense Council, told the website. “I don’t want to underestimate the challenges to moving to a fully zero-carbon grid, but we can get there, and we will.”