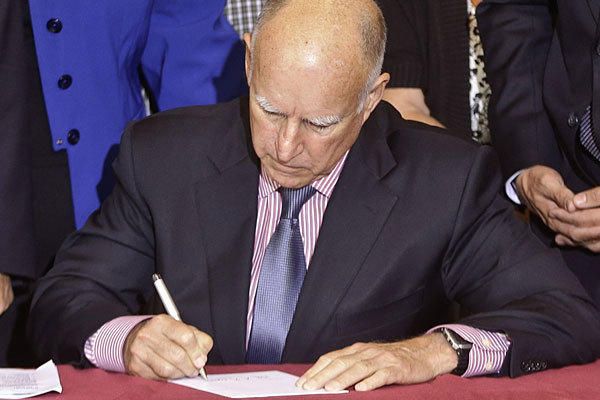 SACRAMENTO – In his veto message of two bills that would have banned smoking at California state parks and beaches, Gov. Jerry Brown argued that there must be “some limit to the coercive power of government.” Nevertheless, in a sea of bill signings this week, the governor vastly expanded the power of government to dictate private workplace rules[1], along with a number of other measures that expand state regulatory prerogatives.

One of the more far-reaching bills, Senate Bill 63[2], mandates that companies with at least 20 employees provide 12 weeks of unpaid leave to workers to care for a newborn or adopted child. Before the signing, state law required such leave for companies with 50 or more workers. The bill’s backers said it is about simple “fairness,” but the California Chamber of Commerce labeled it a “job killer” that “unduly burdens” small companies and “exposes them to the threat of costly litigation.”

Brown also signed Assembly Bill 168[3], which bans all employers – including state and local governments, and even the Legislature – from asking for the salary history of any applicant. Instead, the employer must provide a salary scale. It was pitched mainly as a gender-equality measure.

“The practice of seeking or requiring the salary history of job applicants helps perpetuate wage inequality that has spanned generations of women in the workforce,” said Assembly member Susan Eggman, the Stockton Democrat who sponsored the bill. Opponents argue that there are many legitimate reasons for employers to seek out an applicant’s salary history and that the law will cause employers mainly to enlarge the pay range, thus making it much harder for applicants and employers to find the appropriate level of pay.

These bills were part of a package backed by the California Legislative Women’s Caucus[4]. Not all of them were workplace-related. For instance, the governor signed AB10 by Assembly member Cristina Garcia, D-Bell Gardens, which “requires public schools serving low-income students in grades 6 to 12 to provide feminine hygiene products in half of the school’s bathrooms at no charge.”

And he signed AB273 by Assembly member Cecilia Aguiar-Curry, D-Winters, which “expands the eligibility criteria for subsidized child care services to parents who are taking English as a second language or high school equivalency courses.” Brown also gave the OK to a bill that will subsidize diapers for poor women.

In other topic areas, the governor signed 11 bills[5] on Wednesday designed “to improve California’s criminal and juvenile justice systems, restore the power of judges to impose criminal sentences and reduce recidivism through increased rehabilitation.” These include measures that would seal the records of people who were arrested but never convicted of a crime; allow a parole hearing for juveniles who were sentenced to life without parole; and a bill that gives judges additional discretion regarding the “firearms enhancement” for sentencing decisions.

Furthermore, the governor signed AB1448[6], by Assembly member Shirley Weber, D-San Diego, which allows the Board of Parole to continue its parole hearings for elderly prisoners who have served at least 25 years in prison after federal oversight of the prison system ends. The state had been under federal court decrees dealing with overcrowding, but has since passed a realignment law and other programs that have reduced the size of the inmate population. In his signing message[7], the governor said that this elderly-prisoner program has successfully reduced costs involving geriatric prisoners who no longer pose a risk to society.

The governor previously had signed SB384[8], by Sen. Scott Wiener, D-San Francisco, which creates a tiered sex-offender registry rather than the current system of lifetime registration. The bill received significant law-enforcement support. Supporters argued that “local law enforcement agencies spend between 60 to 66 percent of their resources dedicated for sex offender supervision on monthly or annual registration paperwork because of the large numbers of registered sex offenders on our registry,” according to the Senate bill analysis.

“If we can remove low-risk offenders from the registry it will free up law enforcement officers to monitor the high risk offenders living in our communities,” supporters argued. There was no official, recorded opposition to the bill, but Republican opponents expressed fear in the floor debate that these changes would put the public at risk.

The governor signed a controversial drug-pricing transparency bill, SB17[9], that forces “drug manufacturers to notify specified purchasers, in writing at least 90 days prior to the planned effective date, if it is increasing the wholesale acquisition cost … of a prescription drug by specified amounts.” The pharmaceutical industry fought vociferously against the measure, which it believes is a first step in a national campaign to impose government price controls.

The governor used some of his strongest – and most ideological – rhetoric in touting this measure. “The rich are getting richer. The powerful are getting more powerful. So this is just another example where the powerful get more power and take more,” he said, according to a National Public Radio [10]report of the signing ceremony. “We’ve got to point to the evils, and there’s a real evil when so many people are suffering so much from rising drug profits.”

This was part of a package of recently signed medical-related consumer-oriented legislation[11]. Other legislation puts limits on the gifts and benefits doctors can receive from drug manufacturers, prevents drug makers from steering consumers to higher-priced medications, creates a licensing system for pharmacy benefit managers, and creates a California Pharmaceutical Collaborative to help government agencies negotiate better deals for pharmaceuticals.

Signings have been far more plentiful than vetoes.

But the governor vetoed a bill that would require people who work for many web-based meal-delivery services that deliver pre-packaged uncooked meals to consumers to obtain a food-handler’s card. In his veto message, the governor wrote that he is “not convinced … that the existing regulatory scheme for food facilities is suitable for this new industry.” Brown vetoed a bill that would have created a new state task force[12] that would examine opioid prescriptions in light of the state’s opioid crisis.

He also vetoed[13] AB63, which would have imposed the same curfew (between 11 p.m. and 5 a.m.) on drivers under the age of 21 that now applies only to those under 18. “Eighteen-year-olds are eligible to enlist in the military, vote in national, state and local elections, enter into contracts and buy their own car. I believe adults should not be subject to the same driving restrictions presently applied to minors,” Brown explained in his veto message.

Stay tuned. The governor has until Sunday night to sign or veto the remaining bills passed this session.