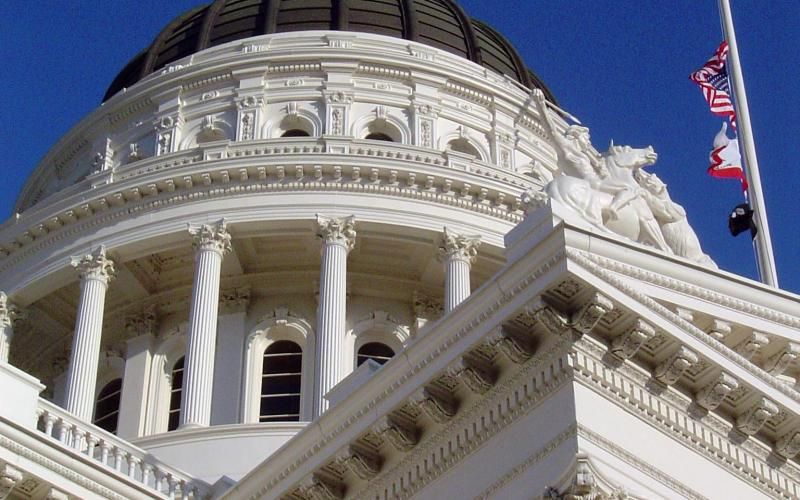 SACRAMENTO – California Gov. Jerry Brown vetoed only 118 of the 957 bills[1] that came before his desk in the recently concluded legislative session, but some of his final vetoes earned a great deal of attention and praise – even from conservative Republicans.

That’s an interesting turn of events given that Brown signed into law[2] most of the main Democratic priorities from the session. He approved a bill that turns California into a “sanctuary state” that limits the ability of local law enforcement to cooperate with federal immigration priorities. He approved a transportation tax and new spending on affordable housing programs. He agreed to a gender-neutral category for California driver’s licenses.

In addition, Brown signed a law that places more limits on the open carry of firearms and mandated that small businesses now provide 12 weeks of unpaid family leave to their workers. There’s much commentary about this having been one of the most liberal sessions in memory[3], which isn’t a surprise given the diminished power of the California GOP.

So what would conservatives – including ones outside of California – be happy about?

The main cause for celebration on the right came from Brown’s veto of Senate Bill 169. That legislation was passed in response to federal Education Secretary Betsy DeVos’ decision to roll back Obama administration sexual-assault guidelines for campuses. Sen. Hannah-Beth Jackson, D-Santa Barbara, pointed specifically to the Trump administration in authoring the bill:

“The Trump administration continues to perpetuate a war on women,” Jackson wrote in a statement[4]. “It is now more important than ever that Governor Brown sign SB169 into law and that other states follow. All students deserve an education in an environment that is safe and free from sexual harassment and sexual violence.”

The issue involves the Title IX federal amendments from 1972 that require schools and universities that receive federal aid to assure an environment that’s free of sexual discrimination and harassment. The Obama administration in 2011 sent a letter to schools, colleges and universities urging stepped up efforts to battle sexual assaults on campus.

But conservatives, such as David French of National Review[5], argued that the Obama-era guidelines were “mandating that (schools) satisfy the lowest burden of proof in sexual-harassment and sexual-assault adjudications, defining sexual harassment far too broadly, and failing to adequately protect fundamental due-process rights.” The new administration rolled back the rules and – to the surprise of many – Brown agreed with Trump and DeVos.

Brown issued an unusually long veto statement[6], in which he noted that “sexual harassment and sexual violence are serious and complicated matters for colleges to resolve. On the one side are complainants who come forward to seek justice and protection; on the other side stand accused students, who, guilty or not, must be treated fairly and with the presumption of innocence until the facts speak otherwise.”

The governor added that “thoughtful legal minds have increasingly questioned whether federal and state actions to prevent and redress sexual harassment and assault – well-intentioned as they are – have also unintentionally resulted in some colleges’ failure to uphold due process for accused students.” Brown also argued[7] that the state should avoid new rules until it has “ascertained the full impact of what we recently enacted.”

In another veto that received praise on the right, Brown rejected Assembly Bill 1513[8], a union-backed measure that would have required private-sector workers in the privately funded home-care industry to provide private information to unions.

Workers who provide help in the homes of sick, elderly and disabled people already pass background checks. But this legislation would require the placement of “a copy of a registered home care aide’s name, mailing address, cellular telephone number and email address on file with the department to be made available, upon request, to a labor organization.”

Labor unions pitched the measure as a way to improve the licensure and regulation of these aides, but opponents saw it as a means to help unions contract these workers as part of their organizing efforts. Brown agreed with the opponents, and expressed concern[9] about “releasing the personal information of these home care aides, who joined the registry without knowing that their information would be disclosed as prescribed by this bill.”

“Conservatives find themselves in the unexpected position of cheering some of California Governor Jerry Brown’s recent vetoes,” wrote Jim Geraghty in National Review[10]. Geraghty also pointed to Brown’s veto of a bill that would require presidential candidates to release their tax returns to qualify for the California ballot and another one that would have required large companies to provide detailed data about male and female salary disparities.

Brown, by the way, vetoed a bill that would have imposed a late-night driving curfew on those under 21. Currently, the curfew applies only to those under 18. The governor made the fundamentally conservative argument that 18-year-olds “are eligible to enlist in the military, vote in national, state and local elections, enter into contracts and buy their own car.” So it would be unfair to limit their driving privileges.

As the 79-year-old Democratic governor finishes his final gubernatorial term, he still has a way of defying critics and keeping people on the left and right guessing.