The Trump administration’s announcement last week that it would seek to lease out 47 large areas[1] in U.S. waters off America’s coasts to oil and gas exploration companies from 2019 to 2024 – including two areas off Northern California, two off Central California and two off Southern California – might have been expected to trigger elation among the Golden State’s energy-exploration firms and panic among its environmentalists.

Instead, Catherine Reheis-Boyd, president of the Western States Petroleum Association, put out a perfunctory statement emphasizing that any such drilling would be subject to “stringent” and “overlapping” state rules as well as federal rules. And Golden State environmentalists and elected leaders pointed to all the different tools with which California could thwart[2] the Trump administration initiative.

The most obvious is that the State Lands Commission controls and has long-established authority over the first three miles[3] off California’s coast. No energy exploration company will pursue an offshore drilling project without certainty that it can get the oil or natural gas it pumps to refineries and related infrastructure onshore. Assemblyman Al Muratsuchi, D-Torrance, and Sen. Hannah Beth Jackson, D-Santa Barbara, announced[4] that they are preparing legislation to forbid the Lands Commission from approving new pipelines or infrastructure related to new offshore drilling. If the state of California blocks the construction of pipelines offshore and needed facilities onshore, offshore drilling isn’t economically feasible. 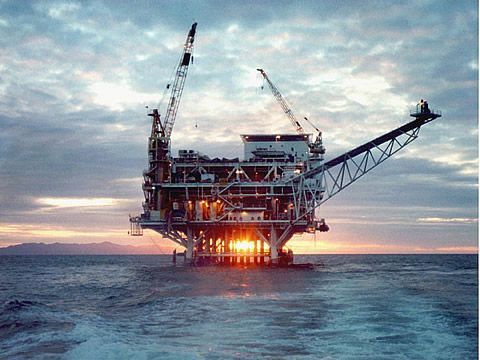 The Coastal Commission also has tools that give it a potential veto over what is happening in the federally controlled waters beyond three miles from shore – if it finds federally sanctioned actions are incompatible with the state’s offshore management plan. The federal courts have at times sided with states and at times with Washington when such claims are made.

While California is the third-largest oil-producing state in the United States – after Texas and North Dakota – its untapped potential has frustrated energy exploration companies for decades. No new offshore drilling, such as the facility off the Santa Barbara coast that is pictured on this post, has been approved in more than 30 years.

On land, some geologists think there are vast amounts of oil[5] in the Monterey shale – a massive underground area along the Central California coast and inland – that could be recovered with fracking. Similar finds have yielded billions of dollars for oil exploration firms and substantial new tax revenues in North Dakota, Texas, Ohio and Pennsylvania.

But while Gov. Jerry Brown initially seemed intrigued[6] by the possibility of drilling in the Monterey shale after taking office in 2011, his interest disappeared after the U.S. Energy Information Administration’s 2014 decision to sharply reduce[7] estimates of recoverable oil under the Golden State.

Instead of grandstanding, as the former Coastal Commission counsel suggested, it’s also possible that the Trump administration and Interior Secretary Ryan Zinke are trolling Gov. Jerry Brown and other Democratic leaders in the deep-blue Golden State.

On Tuesday, Zinke announced he was dropping plans[8] to lease drilling sites off Florida at the request of the state’s governor, Rick Scott, a Republican.

Zinke has offered no comment on the far more vociferous objections to his offshore drilling plan from California’s top elected officials.