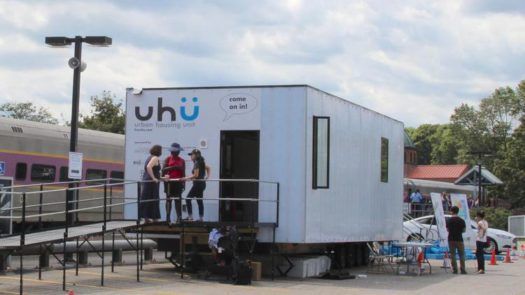 Sacramento has become the latest city to consider responding to California’s acute housing crisis with “tiny homes” – small, prefabricated studio homes with bathrooms and built-in hook-ups for electricity and water.

In an era in which $2,000 apartment rentals, $600,000 homes and $300,000-plus “affordable” public housing units are normal in the Golden State, the appeal of housing that can cost as little as $40,000 per unit is obvious to government leaders dealing with growing homelessness and increased fears that expensive housing will make it difficult to attract needed workers or drive them away.

Sacramento Mayor Darrell Steinberg last month proposed [1]spending $21 million to help pay for the addition of up to 1,000 such homes – from prefab 300-square-foot modular homes to container units that could be set up inside warehouses. Steinberg offered the proposal as the centerpiece of his agenda to respond to his city’s homelessness problem and suggested that public housing vouchers could be used for construction costs.

“It’s all in our grasp,” the mayor said in his annual State of the Downtown address. “Public funding, private funding, tangible goals, public accountability and a community commitment to whatever it takes to make this homeless problem better in Sacramento.”

Sacramento only added 235 housing units in its central city in 2017, according to the Sacramento Bee. The newspaper also recently reported [2]that in one eight-day stretch in January, nearly 35,000 residents got on the waiting list for public housing vouchers, formerly known as Section 8 vouchers.

Some other local governments in California pursuing “tiny homes”:

San Jose – In December, the City Council voted 9-2[3] for a $2.3 million “tiny home” pilot program in which 40 homes would be built in one location. If the project works out, officials hope to add “tiny home” villages in each of the 10 City Council districts, the San Jose Mercury-News reported.

The cost of the first 40 homes is $73,125 each – a pittance in the metro area which in 2016 became the first in the nation to have homes cost an average of more than $1 million[4], according to the National Association of Realtors.

Fresno – In 2016, it became one of the first cities in the nation to formally encourage “tiny homes” when a law took effect. “The pint-sized houses on wheels – complete with kitchen, living room and loft – are now considered backyard cottages thanks to changes in the city’s zoning and development code,” the Fresno Bee reported[5]. “That means tiny homes can be used as independent living quarters on the same lot as a single-family house granted it meets some requirements. Previously, the mobile units could only serve as temporary lodging.”

Clovis – In June, in interviews with the Fresno Bee, city officials touted a long-term development plan for the city’s Old Town that sees “tiny homes” of no more than 400 square feet build in residential alleys as the key to its revitalization.

City officials are working with a local builder to develop three models with designs that are pre-approved[8] by the city and are available for free to the public. The city believes the “tiny houses” would cost about $50,000 on average, according to a report [9]from Fresno County’s ABC 30 News.

Perhaps the American city farthest down the road in embracing the small housing approach is Boston. In 2014, Boston Mayor Martin J. Walsh launched a Housing Innovation Laboratory[10]. City officials have developed a prototype called an Urban Housing Unit, or Uhu[11],  a 385-square-foot modular apartment. The prototype, which may cost as little as $40,000 to manufacture, is pictured above.