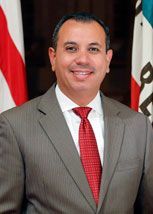 Two law firms hired by the California Senate to investigate allegations of sexual harassment against Sen. Tony Mendoza, D-Artesia, have returned a mixed report[1] that could provoke fissures between senators who want to use Mendoza to set an example for what won’t be tolerated and senators who look at what Mendoza is credibly accused of and worry that it sets too low a bar for expulsion.

The law firms – Gibson Dunn and Van Dermyden Maddux – concluded in a four-page summary of its findings that “it is more likely than not” that Mendoza engaged in “unwanted flirtatious or sexually suggestive behavior” toward six women who worked at the Capitol over the past decade. But the firm’s investigation cleared Mendoza of the harshest overall allegation he faced: the claim he fired three staff members in September in an attempt to squelch an investigation into his conduct. The probe found no evidence linking the firings and the filing of a report with the Senate Rules Committee that alleged Mendoza had repeatedly asked a young Senate fellow to come home with him to “look at resumes.”[2] The investigation also found — except for one women who was kissed on the cheek — no evidence of physical contact between Mendoza and the women he hit on; and no evidence of retaliation against those who rejected his advances.

The Sacramento Bee broke the story last fall of allegations against Mendoza involving three former employees. Within a few days, state Senate President Kevin de Leon moved out of the Sacramento-area home he shared with Mendoza when the two Los Angeles County Democrats were in legislative session.

De Leon, who is running for U.S. Senate, has insisted he was unaware of any improper conduct by Mendoza, who is currently on paid leave.

The investigation included 51 interviews with 47 individuals. Mendoza, who is married and has four children, was among a few people interviewed twice. Last night, he issued a statement calling the investigation inadequate and a rush to judgment.

While the report on Mendoza was far less damning than the allegations against Assemblyman Raul Bocanegra, D-Pacoima, and Assemblyman Matt Dababneh, D-Woodland Hills – who resigned late last year after being accused by several women of sexual misconduct – it contradicts Mendoza on the most serious harassment allegation[3] against him. In 2008, according to then-19-year-old Jennifer Kwart, Mendoza provided the underage intern with alcoholic drinks from the minibar in a suite at a San Jose hotel that was hosting the California Democratic Party state convention. Kwart says Mendoza made plain he expected sex, leading her to concoct a family emergency and leave the following morning.

Unlike his responses to some of the allegations made against him, Mendoza dismissed Kwart’s claims as “completely false.” The lawyers hired by the Senate Rules Committee concluded otherwise, finding that it was “more likely than not” that Mendoza “offered and subsequently had alcoholic drinks with the intern in the hotel suite” and “engaged in unwanted flirtatious and sexually suggestive conversation with the intern.”

Mendoza, 46, a former elementary-school teacher, served as an Assembly member from 2006 to 2012. He was elected to the Senate in 2014 and was expected to coast to re-election this November. Even if the Senate chooses not to oust him, the allegations will be a headache for Mendoza going forward. The Los Angeles Daily News reported earlier this month[4] that Rio Hondo College board trustee Vicky Santana, a risk manager with the Los Angeles County Probation Department, would definitely challenge Mendoza. The report also said Montebello Mayor Vanessa Delgado had pulled papers and was considering running. Both Santana and Delgado are Democrats.