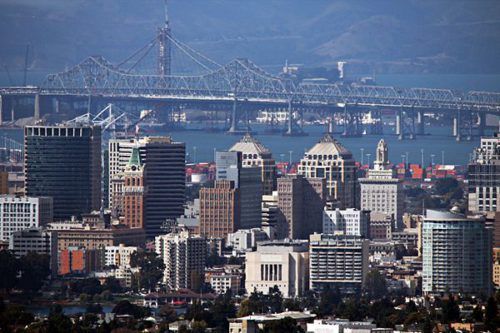 It’s been a tumultuous era in Oakland. The Police Department has been enmeshed in an ugly scandal[1] surrounding officers’ involvement with an underage sex worker that led to an officer’s suicide, firings and turnover in the chief’s office. City Hall was unable to prevent the Oakland Raiders from agreeing to move to Las Vegas. And in the past month, Mayor Libby Schaaf has engaged in a high-profile war of words[2] with President Donald Trump and Attorney General Jeff Sessions over her opposition to federal immigration control efforts in her city.

But now Oakland is also wrestling with a painfully familiar story: financial turmoil in local schools. The state took some of Oakland Unified’s autonomy in 2003 after the Legislature approved an emergency $100 million loan[3] to the then-reeling district. With $40 million of the loan still unpaid, the state continues to oversee district spending, though with a smaller role. Now there are new indications that even Oakland Unified’s limited autonomy could disappear[4] for another long stretch as school officials struggle to make ends meet yet again.

In recent months, district officials had to approve what were described as “emergency” $9 million cuts[5] in the district’s $521 million[6] general fund 2017-18 budget and to authorize potentially greater reductions in 2018-19 as well. The cuts were widely denounced in public meetings as unnecessary and indicative of poor management.

This criticism has been buttressed by the Fiscal Crisis Management Action Team (FCMAT), the state agency[7] that works with struggling school districts. In an August report[8], FCMAT warned that a “fiscal emergency” loomed if Oakland Unified officials didn’t quit spending reserve funds to cover budget shortfalls. FCMAT depicted the Oakland school board as irresponsible for approving cumulative raises for teachers of 14.5 percent in the 2014-15, 2015-16 and 2016-17 school years in a three-year span in which the cost of living went up by less than 2 percent. These pay hikes were the biggest drain on district reserves.

Oakland board members brought more criticism on themselves in January when they approved 5 percent pay raises for themselves. While the total amounts were small – $39 per board member per month – San Francisco Chronicle columnist Otis Taylor Jr. wrote[9] that district students and parents were appropriately “livid” about the salary boost at a time when schools often lacked funds for basics like toilet paper.

A recent East Bay Times analysis[10] suggested there was plenty of blame to go around for Oakland Unified’s fiscal headaches. It largely absolved district Superintendent Kyla Johnson-Trammel, who took over[11] in January 2017, noting her predecessor had failed to follow through on plans to lay off 42 employees because declining enrollment had left the district with less than 37,000 students. Since enrollment directly determines how much state aid comes to districts, well-run districts usually reduce employees when enrollment drops. With enrollment down 33 percent from its 1999 peak of 55,000, Oakland Unified has thus faced constant pressure to downsize.

But information distributed by the district before Oakland Unified trustees approved the recent $9 million in cuts pointed[12] to another budget culprit – one that is hammering districts statewide. That is the bailout of the California State Teachers’ Retirement System approved by the Legislature and Gov. Jerry Brown in 2014. It phases in an 80 percent increase in annual contributions to CalSTRS from fiscal 2014-15 to fiscal 2020-21 – going from $5.9 billion a year to $10.9 billion.

More than two-thirds of this additional cost must be borne by local school districts. In 2014-15, they were required to pay 8.25 percent of teacher payroll to CalSTRS. Beginning in fall 2020, that amount will be 19.1 percent – a 132 percent increase in per-teacher pension funding obligations. Even in districts with high numbers of English-language learners – which receive additional funding under the Local Control Funding Formula, a 2013 state law – pension obligations have created major headaches.

School Services of California – a consultant which advises a large majority of the state’s 1,000 school districts – estimated last July that at least 280 districts would struggle to pay bills in the 2017-18 school year. A San Jose Mercury-News analysis[13] at the time suggested that the just-ended 2016-17 school year might be looked back on in 10 years “as the last good year in recent times for public education.”

The August 2017 FCMAT report[8] on Oakland Unified raised additional concerns about why the district would struggle with its finances in coming years beyond inadequate funding. FCMAT faulted the district for inadequate internal budget controls, for allowing significant expenditures without board approval and for inadequate training of officials with budget responsibilities.