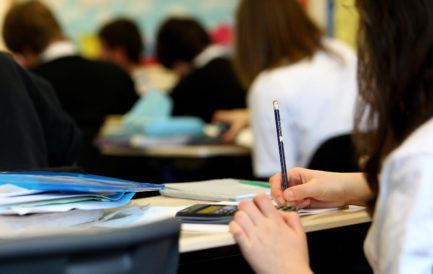 Every two years, at the order of the federal government, the National Assessment of Educational Progress tests are administered to check on fourth- and eighth-graders’ progress in math and reading in all 50 states. While eighth-graders showed gains on reading, California’s overall scores for 2017 released earlier this month remained on average among the worst in the nation, as the EdSource website reported[2].

But a deeper dive into the data showed that California fourth-graders scored worse on math than any state but Alaska[3]. Poor scores by African-American students caught the eye of Ryan Smith, executive director of the Education-Trust West. “At a time when California is claiming to lead on issues of what’s right in our country, we should see black students improve at far greater rates, not sliding back decades,” he told EdSource.

What made the results particularly disappointing were the high expectations that had accompanied the enactment in 2013 of the Local Control Funding Formula[4] (LCFF) – arguably the biggest change in California public education since Gov. Pete Wilson and the Legislature approved the hiring of thousands of new teachers in 1996 as part of an ambitious effort to reduce the number of students in first-, second- and third-grade classes to no more than 20 per teacher[5].

Brown led the push for LCFF, calling it a commitment to social justice and education equity. The measure guaranteed additional funding to districts with high concentrations of English-language learners, impoverished families and foster children. The law’s second main component also eliminated most of the top-down funding edicts imposed on school districts.

Brown argued that local districts had a better grasp on what their students’ needs were than state lawmakers and Sacramento bureaucrats, and that LCFF would give local schools extra resources that would allow them to improve education outcomes for struggling students.

Claims that funds were diverted came early and often

But even before this month’s disappointing test scores, the Local Control program had drawn fire. In January 2015, the Legislative Analyst’s Office said none of the 50 school districts it reviewed had set up adequate standards to make sure the funds were used as they were supposed to be. Soon after, Education Trust-West and other groups which advocate for poor and minority students said funds meant to specifically help these students were instead used for overall district spending, starting with teacher raises[6].

Brown supported state Superintendent of Public Instruction Tom Torlakson after he formally rejected [7]the criticism – with both saying, in effect, that local control meant local control. Efforts in recent years by lawmakers to force a stricter accounting of LCFF dollars have been blocked[8] by teachers union allies in the Legislature, notably Assemblyman Patrick O’Donnell, the Long Beach Democrat who chairs the Assembly Education Committee. In 2016, the governor vetoed [9]an LCFF accountability measures that managed to win the Legislature’s unanimous approval.

But in January, in presenting his final budget before being termed out, Brown offered an indirect concession to those upset with how LCFF dollars had been used.

“While many districts have seized the opportunities offered under the formula to better serve their students, others have been slower to make changes,” his 2018-19 spending plan noted. “To improve student achievement and transparency, the budget proposes requiring school districts to create a link between their local accountability plans and their budgets to show how increased funding is being spent to support English learners, students from low-income families, and youth in foster care.”