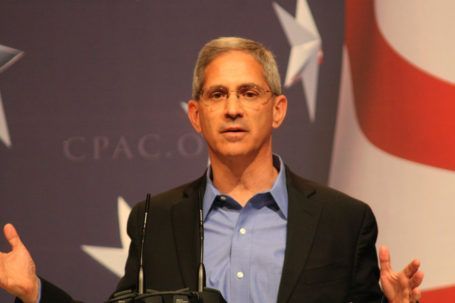 Is California now a deep blue state in which moderate conservatives no longer have a chance of victory in statewide elections? Or do such candidates still have hopes if they pass on the two-party system and run as independents apart from the partisan fray?

The former theory has been the topic of recent[1] stories[2] in the national media. But it’s the latter view driving the candidacy of tech entrepreneur Steve Poizner, who was elected California insurance commissioner in 2006 as a Republican and is seeking a second term this year while running as an independent. (Incumbent Dave Jones is termed-out and is running for attorney general.)

Poizner, a resident of Los Gatos in Silicon Valley, is a lock to advance past the June 5 primary to a November general election race against state Sen. Ricardo Lara, D-Bell Gardens. The other two candidates[3] in the race have little name recognition and are lacking in institutional support.

But a Poizner win would seem to be a long-shot in the general election, based on 2014’s results. That year, several Republican candidates ran for statewide office with plausible claims to Arnold Schwarzenegger-style moderate conservatism. Since they were not going up against incumbents, two of these candidates – Fresno Mayor Ashley Swearengin, who ran for controller, and Pepperdine University administrator and civic activist Pete Peterson, who ran for secretary of state – were thought to have decent chances. Both[4] lost[5] by at least 500,000 votes.

Yet Poizner has factors in his favor that those 2014 GOP candidates didn’t.

The first is Lara’s struggle to define the campaign on his terms. Since Poizner got generally good marks as insurance commissioner for balancing the interests of consumers and insurers, Lara has focused on Poizner’s strong anti-undocumented immigrant positions in 2010, when he sought the Republican gubernatorial nomination but lost to former Hewlett-Packard CEO Meg Whitman. Poizner now disavows those positions. In endorsing Poizner, the editorial boards of the Sacramento Bee[6], the San Jose Mercury-News[7] and the San Francisco Chronicle[8] focused instead on Poizner’s readiness to deal with such difficult insurance issues as autonomous vehicles and increasing wildfire risks.

Meanwhile, the “issues page” [9]of Lara’s own campaign website lists nine topics, including transportation and criminal justice – but not insurance. It appears designed for a gubernatorial candidate. Poizner’s website[10] focuses primarily on his dealings with insurers in his previous term and his endorsements.

Lara’s history[11] as co-sponsor of Senate Bill 562 – which would commit the state government to adopting a single-payer health care system – is also proving a double-edged sword. His high-profile support of the proposal has won raves[12] from the California Nurses Association and progressive Democrats.

But SB562[13], which passed the Senate last summer before stalling in the Assembly, has faced a backlash from across the ideological spectrum for being vague and incomplete. The measure’s language doesn’t specify[14] how its estimated $400 billion annual tab would be covered; how it could overcome a California Constitution provision blocking sharp increases in state spending; and how it would be able to divert federal health dollars for unprecedented use on a single state’s unique program.

Poizner campaign[15] literature suggests questions about the cost of SB562 will be a focus of his fall campaign ads.

Should high-risk homes get insurance protection?

Lara’s similarly populist position on wildfire costs may also play better with progressives than with voters in general. He has proposed legislation to make it more difficult [16]for insurers to consider recent fires when setting rates and deciding on whether to offer coverage in high-risk wilderness areas.

This has won praise from officials and homeowners in rural counties. But the measure has also faced criticism[17] from insurers, who say if Lara’s proposal is enacted, millions of homeowners in low-risk areas would have to subsidize the rates of those in wilderness zones.

Still, Lara has a conventional but potent ace in the hole: his ability to run a fall campaign ad blitz reminding Californians of Poizner’s history as a Republican in a state with a dwindling number of Republicans. The latest state registration data show only one-quarter of voters identify with the GOP – a record[18] low.

A Probolsky Research poll[19] from last month put Poizner ahead of Lara. But most of those surveyed were undecided or didn’t want to take any position.