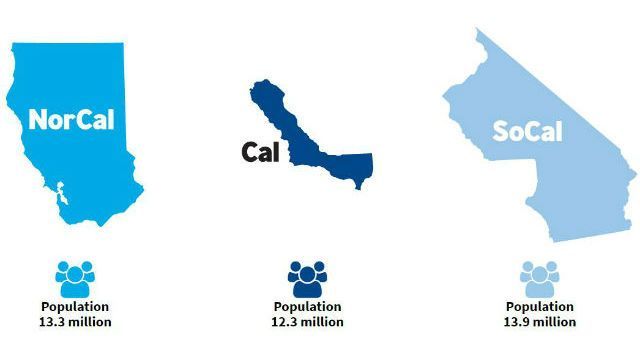 A plan to split up California into three separate states has gathered enough signatures to qualify for the November ballot, California Secretary of State Alex Padilla’s office confirmed this week.

The initiative received around 600,000 signatures — almost double the amount needed to qualify for the November 6th ballot.

“No one can argue that California’s government is doing a good job governing or educating or building infrastructure for its people,” Draper told The New York Times last year. “And it doesn’t matter which party is in place.”

While the group faces heavy hurdles in actually swaying voters, as a recent SurveyUSA poll shows voters are overwhelmingly opposed to the move, if it passed, the change could have a sizable effect on the national election map, and perhaps be a boost to the GOP in the electoral college.

For example the potential “Southern California” includes Fresno, Tulare, Madera and Kern counties, all of which voted for President Trump in 2016. Additionally, the historically conservative Orange County is in that theoretical state.

But it would also likely result in four more Democratic senators from California and Northern California.

Even if voters were persuaded to backing it, the intuitive would still need the approval of the California Legislature and the U.S. Congress.

The plan still comes with numerous question marks — like the transactional costs of actually breaking up the state with respect to how university systems, public works projects, and other governmental services would be divided and structured during a transition into three separate states.

“California government can do a better job addressing the real issues facing the state, but this measure is a massive distraction that will cause political chaos and greater inequality,” tweeted Steve Maviglio, a consultant for the opposition effort NoCABreakup. “Splitting California into three new states will triple the amount of special interests, lobbyists, politicians and bureaucracy.”

But supporters cite those same issues as reasons for breaking up the state in the first place, arguing that California has become too big to succeed.

“The California state government isn’t too big to fail, because it is already failing its citizens in so many crucial ways,” Peggy Grande, a spokesperson for Citizens for Cal 3 campaign, said in a statement. “The reality is that for an overmatched, overstretched, and overwrought state-government structure, it is too big to succeed. Californians deserve a better future.”