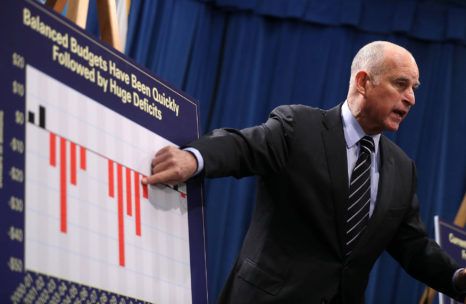 When the annual California budget debate began in earnest[1] with Gov. Jerry Brown’s release of a proposed 2018-19 fiscal plan in January, progressives were ready to go with a long list of new spending proposals. Many hoped to both expand the social safety net and to make existing state welfare programs more generous.

But nearly six months later, as final work on the budget wraps up, Brown’s dominance of state finances has gone all but unchallenged. Any assumption that a lame-duck governor in his final year would have less clout has long since been disproved.

For the fiscal year which begins Sunday, the state will have a $138.6 billion general fund. Spending on special funds dedicated to specific programs and on bond debt will bring the total overall budget to $199.6 billion.

Brown made some concessions during the budget process. The state will spend an additional $600 million on programs to help local governments deal with homelessness; give an additional $344 million to the CSU and UC systems; and provide $90 million more for monthly CALworks welfare payments.

But new spending is dwarfed by the billions of dollars the state continues to set aside in reserves. Nearly $14 billion is expected to be in the state’s “rainy day” fund and $2 billion more in other funds by the end of fiscal 2018-19 – so much so that the state may soon have to cut the sales tax to prevent reserves from exceeding constitutional limits[2].

The governor has emphasized building up reserves because of his frequently voiced belief that the state is overdue for a recession. Because by far the state’s biggest source of money is income and capital-gains taxes paid by the very wealthy, revenue can plunge[3] rapidly when Silicon Valley stumbles. A decade ago, in the first fiscal year after the Great Recession, revenue fell $20 billion – leading to cuts in spending on public education and welfare programs under Brown’s predecessor, Arnold Schwarzenegger.

The freshness of this budget pain in the memories of dozens of long-serving state lawmakers has made even some ardent liberals open to the governor’s relative frugality.

No expansion of Medi-Cal to undocumented adults

This was evident in the resolution of the fight over access to Medi-Cal, the state program providing health care to the poor. Some Bay Area and Los Angeles County Democrats pushed hard for giving regular, full access to the subsidized care to older unauthorized immigrants, not just to children, as is now the case.

But the governor never budged. All progressives got out of Brown was an agreement to form a commission that will “broadly study California’s health care needs” – a concession that was dismissed as meaningless by some groups which had hoped for much more, according to a Los Angeles Times report[4]. Cynthia Buiza, executive director of the California Immigrant Policy Center, told the Times that the “budget deal is devastating for the health of all that call California home. … We are specifically disappointed that our low-income immigrant neighbors, friends, colleagues and communities will continue to suffer from [Medi-Cal] exclusion.”

Republican lawmakers were largely on the sidelines in shaping the budget. While some praise Brown for restraining his fellow Democrats, others challenge the narrative that he is frugal. A recent budget op-ed in the Los Angeles Times offered some support[5] for this skepticism. It noted that total spending will go up by 9 percent from the current fiscal year to the next one – more than four times[6] the rate of inflation.