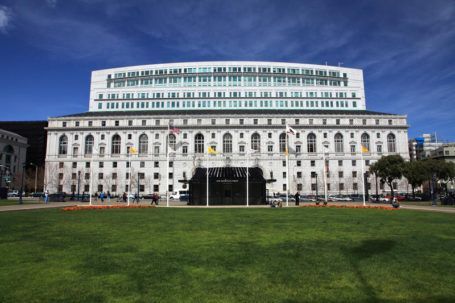 A recent[1] unanimous ruling by the California Supreme Court (pictured) that may force the city of San Diego to retroactively create pensions for non-police employees hired since the start of 2013 isn’t just bad news for pension reformers. It also serves notice to elected officials who participate in signature-gathering campaigns for local ballot measures that they need to be wary of doing so in a way that interferes with state laws requiring[2] that changes in work conditions be collectively bargained with employee unions.

At issue was Proposition B[3], approved by San Diego voters in 2012 by a nearly 2-to-1 margin. The measure required that all city employees who began their jobs on or after Jan. 1, 2013 – except for police officers – get 401(k)-style retirement benefits instead of the defined benefit pensions that left San Diego finances in near ruins[4] more than a decade ago because of City Council decisions to underfund them.

But San Diego employee unions and the California Public Employees Relations Board (PERB) argued[5] even before the measure reached the ballot that it violated state collective bargaining laws because the campaign for the pension changes was led in 2011 and 2012 by then-San Diego Mayor Jerry Sanders. He claimed that his role in the Prop. B campaign was as a private citizen – not as mayor – and thus he faced no obligation to collectively bargain with public employee unions before touting the direct-democracy initiative.

Before reaching the state high court, a trial judge first disagreed with Sanders and San Diego, then an appellate court sided with the city. But all seven state justices joined in a ruling that found that city leaders had not met their requirement to first seek changes at the bargaining table before seeking to impose them through direct democracy.

“Allowing public officials to purposefully evade the meet-and-confer requirements of [state collective bargaining rules] by officially sponsoring a citizens’ initiative would seriously undermine the policies served by the statute: fostering full communication between public employers and employees, as well as improving personnel management and employer-employee relations,” the court held. It ordered the case be sent back to the appellate court to determine how San Diego should untangle its mess.

Elected leaders may be less likely to lead ballot fights

The decision seems likely to change the nature of direct democracy going forward – at least at the local level of California government.

Direct democracy, brought forward in California by Gov. Hiram Johnson in 1911, has greatly benefited from the active participation of elected officials. They are often more able to win public approval of sweeping reforms through the ballot box than they can through the Legislature or city or county governing boards, which are often allied with deep-pockets special interests.

But similar efforts by a politician in 2018 would face a different kind of vetting than Warren faced. Going forward, any ballot proposal that affects public employees in any way is subject to a potential court veto if it can be established that it were led by elected officials who didn’t live up to their collective bargaining obligations.

The California PERB Blog’s analysis [7]noted that justices “did leave open the possibility that government officials can separate their official actions from their private activities. However, the court did not provide any guidance on what a government official would have to do to make such a distinction clear.”