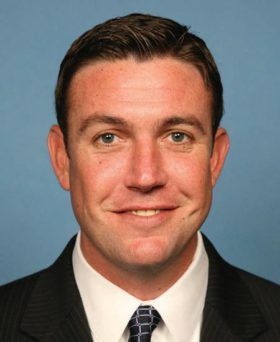 The 60-count indictment issued Aug. 21 by the U.S. Attorney’s Office in San Diego targeting [1]Rep. Duncan Hunter, R-Alpine, and wife Margaret Hunter for allegedly spending $250,000 in campaign funds for personal uses, then trying to cover up their actions, has led to media speculation that Hunter’s seat was a potential Democratic pickup in November.

“Duncan Hunter’s Indictment in California Opens the Door for a Long-Shot Challenger,” was the headline on a New York Times analysis[2] by veteran political reporter Adam Nagourney.

But the idea that California’s 50th Congressional District – which covers much of east and north San Diego County and south Riverside County – might be in play seemed far more plausible to East Coast media outlets than to media in Southern California.

That’s because the district is as solidly Republican as any in California. Republicans hold a 15-percent registration edge over Democrats, Donald Trump won the district by the same amount in 2016, and in the June primary, Democrats only got 36 percent of the vote – even though stories about Hunter’s profligate spending of campaign funds had been in the news for more than two years.

Opponent may be hard sell in pro-Trump district

It’s also because of Hunter’s young, inexperienced opponent – 29-year-old Ammar Campa-Najjar, a former U.S. Labor Department spokesman. While the first-time candidate has so far slightly out-raised [4]Hunter in campaign donations, his background may make him a uniquely hard sell in a district known for its ardent support of Trump. Campa-Najjar is the son of an Arab father and a Mexican-American mother – and, as Fox News and other conservative outlets emphasized[5], the grandson of one of the terrorists who helped plan the killing of 11 Israeli athletes at the 1972 Summer Olympics in Munich, Germany.

Campa-Najjar, a Protestant[6], told [7]a reporter for The Independent newspaper of London that he was confident district voters would recognize the irrelevance of the issue. “[W]hen it comes to my distant relative – who died 16 years before I was born – he influenced my thinking as much as he did yours, which is not at all,” he said. “I knew him as much as you did. So it really is kind of a non-sequitur. It plays on xenophobia and distorting facts and it really has no bearing.”

Campa-Najjar told[8] the San Diego Union-Tribune that his “ethnic background is not a liability, it’s an asset,” citing the large number of Chaldeans and Latinos in the 50th.

Nevertheless, in a Survey USA poll released [9]Monday, Hunter held a 47 percent to 39 percent lead over Campa-Najjar. But the subcategories of the poll point to the obstacles facing the challenger. Hunter received a surprising 41 percent of the vote among independents. The 23 percent of Republicans who now say they won’t back him could consolidate behind the five-term incumbent – especially as the prospect of Democrats retaking the House is emphasized by the media in the run-up to the November vote.

Hunter’s claim that he is the victim [10]of a Justice Department plot led by prosecutors who were donors to Hillary Clinton’s 2016 campaign resonated with many voters. Among decline-to-state voters, 41 percent said they believed the Hunter indictment was political; 64 percent of Republicans held that view.

Hunter, a former Marine, was the first member of Congress to have served in the military in both the Iraq and Afghanistan wars. He succeeded his father in 2008, who had represented eastern San Diego County in the House since his 1980 election.