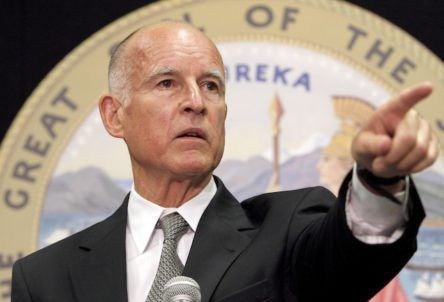 Gov. Jerry Brown will have to decide soon on whether to once again put California in direct conflict with the Trump administration – this time with a newly passed bill which has the near-unanimous support of Republican as well as Democratic state lawmakers.

It’s Senate Bill 539, by U.S. Senate candidate Kevin de León, a state senator from Los Angeles. The measure would limit the impact on affluent[1] residents of the new $10,000 federal limit on deducting state and local taxes from federal tax returns by sharply increasing an existing tax credit for contributions to a college scholarship program already run by the state.

If SB539 is signed by Brown, families making more than $100,000 – especially homeowners – could potentially save billions of dollars with the new, much higher 75 percent credit. In 2015 – the most recent year for which statistics are available – 6.1 million California tax filers used the state and local tax deduction, with an average of $18,438, according to the Tax Policy Center.

This explains the bipartisan appeal of the measure, which passed the Assembly and Senate with a total of two[2] negative votes – one Republican (state Sen. Jim Nielsen of Fresno) and one Democrat (Assemblyman Jim Frazier of Contra Costa County).

It’s not clear whether Brown will sign the measure. While he called the Republican tax overhaul approved last December “evil in the extreme” at the time it was being considered by Congress, he’s been reported to be skeptical that any state tax avoidance effort would be accepted by the Internal Revenue Service.

That’s the impression the IRS has sought to create since the state and local tax deduction was limited. And last month, the IRS proposed a 15 percent cap on deductibility of certain gifts, including to state programs like the one that would benefit from SB539.

The proposed IRS rule is so broad, however, that Gannett News Service reported[3] on Aug. 24 that it could affect laws allowing for state and local tax credits for charitable contributions in 34 states. In several Republican-dominated states, these credits are available for private school tuition.

“The IRS chose to adopt a new rule after New York and a few other states who overtax their citizens at the state and local level had the audacity to create federal tax-dodging schemes,” EdChoice told Gannett. “These tax-dodging schemes do not compare in intent or purpose to the charitable programs created years ago to help children access K-12 education where they fit in and can learn.”

Treasury Secretary Steven Mnuchin, however, disputed the idea that the proposed IRS rule would have a heavy impact on donations to private schools and to school choice advocates.

In July, four states – New York, New Jersey, Connecticut and Maryland – sued[5] the federal government over the deduction limit, saying it amounts to unconstitutional “double taxation.” The Tax Foundation says those states and California are the five where taxpayers will face the biggest hit.

But most tax experts think the lawsuit is unlikely to win, given the long-established primacy of Congress in setting tax laws and of the IRS in interpreting them.

California has already sued[6] the Trump administration more than 50 times – but not, so far at least, over the tax deduction change.