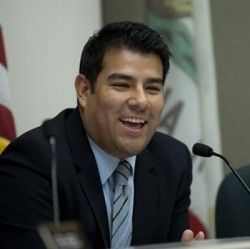 A bill with the potential to worsen California’s already-frosty relationship with the Trump administration passed the Legislature on a near-party-line vote[1] in late August and was presented to Gov. Jerry Brown for his signature last week.

Senate Bill 349[2], by state Sen. Ricardo Lara (pictured), D-Bell Gardens, is a direct response to the U.S. Immigration and Customs Enforcement’s embrace of the tactic of detaining unauthorized immigrants when they come to state courthouses to deal with matters in the California criminal justice system.

Exact statistics are not provided by ICE on its detentions. But there have been regular reports of ICE raids at state courts and their parking lots in California – especially in the Fresno area – as well as in Arizona, Texas and Colorado within the last year.

ICE officials issued a formal notice in January of their intent to go after targeted individuals when they have scheduled appearances in state courts. Some have said they moved to adopt new policies after the California Legislature adopted and Gov. Brown signed “sanctuary state” legislation[3] last year limiting state cooperation with federal immigration officials.

Lara’s bill would specify that state court officials have the authority to block activities that interfere with the proceedings and operations at state courts. It would require federal immigration agents to have a warrant before they can enter schools, courthouses and state buildings to arrest or question people. It would ban civil arrests in courthouses and authorize the state Attorney General’s Office to pursue civil claims against individuals who violated SB349’s provisions.

The legislative aides who wrote the analysis of the bill cited historical evidence that the practice of not picking up people at courthouses for offenses unrelated to their visits – known as “the common law privilege for civil arrests” – goes back hundreds of years and far predates any controversy over illegal immigration.

Brown and state Attorney General Xavier Becerra have been joined in their sharp criticism of ICE’s tactics by California Supreme Court Chief Justice Tani Cantil-Sakauye. In a statement issued last month, she blasted arrests at state courts as “disruptive, shortsighted, and counterproductive … . It is damaging to community safety and disrespects the state court system.”

Nonetheless, conservative sheriffs in some counties who oppose “sanctuary” policies are supportive of ICE’s aggressive tactics, according to a recent report[4] in the Los Angeles Times. Fresno County Sheriff Margaret Mims is openly looking for ways to increase her department’s cooperation with ICE in spite of the state law.

That suggests that even if Lara’s bill is signed by Brown, some police agencies may be far less enthusiastic about enforcing it than others. Court battles over what exactly “sanctuary”-style laws compel these agencies to do seem likely.

At issue is the scope of the generally accepted doctrine that the federal government cannot compel state law enforcement agents to enforce federal regulations and that state laws prevail unless they directly conflict with federal laws.

Historically, conservatives in the post-Reagan era and Southern Democrats in the 1950s and 1960s have had more of a “states’ rights” approach to interpreting this doctrine, while liberals have leaned more toward the idea that the federal government deserves deference in gray areas open to different interpretations.

In the Golden State, these political roles have been swapped in the Trump era.

While sharply critical of the Trump White House on many immigration issues, Brown has not commented specifically on Lara’s bill. He has until Sept. 30 to sign or veto it and the hundreds of other passed bills he has not yet made a decision on.