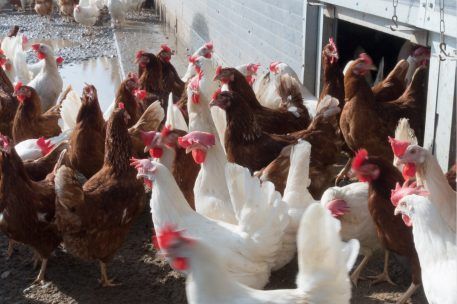 California voters’ support for farm animal rights was made clear in 2008 with the landslide victory of Proposition 2, which said animals could not be confined in a way that prevented them from turning around freely, lying down, standing up or fully extending their limbs. The measure won 63 percent of the vote and took on even greater significance when the state Legislature passed a law saying the limits on confinement applied to all food sold in California, not just the products of farms in the Golden State.

Now another measure, once again sponsored by the Humane Society of the United States, is on the California ballot. Proposition 12 would require that chickens have a minimum of 1 square foot of confinement space by 2020, with a mandate that all egg-laying hens be cage-free by 2022. It would also require 24 square feet for each breeding pig by 2022 and 43 square feet of space for each calf raised for veal by 2020.

Proposition 12 is expected to pass easily. Not only does it have broad support from the state Democratic Party, the California Labor Federation and a range of civic groups including the League of Women Voters, it’s also backed by some farm interests, including Central Valley Eggs, one of the state’s largest “factory farms.”

But the measure faces criticism on several fronts.

The People for the Ethical Treatment of Animals – which formally supports a vegan diet – opposes the measure as providing cover for continuing the human consumption of animals. “Humane labels make consumers feel good about their decisions but perpetuate cruelty to animals,” PETA’s Lindsay Dadko told Governing magazine.“ Cruelty is cruelty is cruelty, and it doesn’t matter what label you put on it.”

The California Farm Bureau, the state Republican Party and several business groups oppose Proposition 12 as imposing unique burdens on Golden State farms that hurt their ability to export eggs and meat to other states and nations.

According to a 2017 study by Purdue University agriculture researchers, Proposition 2 imposed a 9 percent premium on California egg prices. It is also associated with a drop of 34 percent in egg production – going from 5.3 billion eggs in 2007 to 3.5 billion in 2016.

The state Legislative Analyst’s Office concluded that Proposition 12 was likely to yield higher prices for eggs, pork and veal, mainly because of the cost of building or modifying confinement structures.

But a third faction opposes Proposition 12 on the grounds that it is actually a step back for chickens, at least until the cage-free rule takes effect in 2022. This is based on the idea that state regulators have botched their interpretation of Proposition 2. The Humane Farming Association and other groups say that egg-laying hens when stretching their wings take up at least 2 square feet, and that Proposition 12 – with its 1 square foot requirement – is much worse.

On Friday, during a KQED forum on Proposition 12, Bradley Miller, director of the Humane Farming Association, said, “We can do better. One square foot per hen is cruel. They should have more space than that.”