PG&E may not survive latest wildfire without more state help 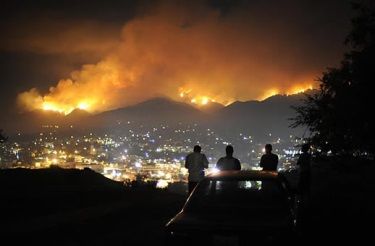 How much of wildfire costs not covered by insurance should be paid by California’s giant investor-owner utilities has been a significant issue since at least 2007. That’s when wildfires ravaged[1] northern and eastern San Diego County, killing two people and destroying more than 1,300 homes.

San Diego Gas & Electric argued that it should be allowed to pass on $379 million in related costs. But the California Public Utilities Commission and state courts – noting the evidence that poorly maintained equipment had been blamed for much of the damage in two state investigations – have rebuffed[2] SDG&E. The utility’s most recent setback came just last week when the state 4th District Court of Appeal in San Diego rejected[3] a call to overturn previous rulings.

But during SDG&E’s long fight for a utility-favorable interpretation of liability laws, the debate has become far more high-profile. With six of California’s all-time 10 worst wildfires occurring since September 2015[4] in areas served by Pacific Gas & Electric and Southern California Edison, the question of what to do to keep the state’s two largest investor-owned utilities in business has emerged as one of the thorniest, most contentious issues in Sacramento.

Now, with Northern California reeling from its deadliest fire ever in Butte County, and with a large area of Ventura County and northwest Los Angeles County ravaged in the past two weeks, PG&E and Edison are confronted with a perverse twist on their successful efforts to get the Legislature to give them relief from huge wildfire costs.

Senate Bill 901 – the main measure passed in late summer to insulate utilities from the extreme costs of fires – doesn’t take effect until Jan. 1. That means its provisions to limit utilities’ liabilities if it could be shown they properly maintained their equipment in fire-prone wilderness areas won’t help PG&E or Edison with this fall’s blazes.

Instead, the old standard that led to negative rulings against SDG&E will be used in assessing damages. Given that utilities’ equipment is blamed for helping start the latest round of wildfires, that could be apocalyptic for the finances of PG&E. As of[5] Monday afternoon, the Camp Fire had killed 77, with nearly 1,000 people unaccounted for, and torched 151,000 acres and nearly 13,000 structures.

In the Woolsey fire northeast of Los Angeles, three people have died, while more than 96,000 acres and 1,400-plus structures have burned.

In coming days, the focus is likely to be on how many of the missing in the Camp Fire are dead. It could end up as one of the five deadliest[6] natural disasters in the United States in this century – nearly as lethal as Hurricane Katrina.

But eventually the focus will return to whether PG&E can survive the latest conflagrations even as it deals with potential losses in the billions from previous fires – and how much more state lawmakers and Gov.-elect Gavin Newsom should do to help the utility survive in its present condition.

Its company valuation plunged by more than one-third after the severity of the Camp fire became evident, only to jump[7] somewhat late last week after the president of the state Public Utilities Commission offered supportive comments.

“It’s not good policy to have utilities unable to finance the services and infrastructure the state of California needs,” Michael Picker told Bloomberg News[8]. “They have to have stability and economic support to get the dollars they need right now.”

PG&E has filed for Chapter 11 bankruptcy before, in April 2001, when the utility was squeezed by sky-high energy costs after the blackouts of winter 2000-2001. It emerged[9] from bankruptcy three years later.

But a huge scandal since then has left Northern California lawmakers with less goodwill toward the 113-year-old[10] utility, whatever Picker’s views and whatever their willingness to pass SB901.

In 2010, a PG&E transmission line exploded in the San Francisco suburb of San Bruno, leaving eight dead and destroying 38 homes. In 2017, a federal judge found the utility guilty of five felonies[11] for its failings to safely maintain the gas line, and a sixth felony for obstructing the National Transportation Safety Board’s investigation into the disaster.

Sen. Jerry Hill, D-San Mateo, routinely refers to PG&E as a “criminal” institution. Last week, he renewed[12] his call to break up the utility, saying it could no longer be trusted to act in the interest of public safety.