In September, when the FBI released national crime statistics for 2017 that showed San Francisco had the highest rate of property crimes per capita of any of the 20 largest U.S. cities, officials were quick to say the problem was getting better.

Last year saw about 54,000 property crimes in the city – about 150 car break-ins, burglaries and thefts a day. But the San Francisco Police Department depicted the city as having turned the corner[1] on the problem, using better coordinated responses to cut car break-ins by 14 percent. They said the criminal gangs who were behind most of the break-ins were less active.

Yet a San Francisco Chronicle story printed[2] earlier this month suggests that police have exaggerated their progress.

“Politicians and police have bragged repeatedly that property crimes and car break-ins are down from last year’s epic high. But what they don’t mention is that they’ve actually gone up in the area patrolled by the Central Station, which includes most of San Francisco’s major tourist destinations: Union Square, Fisherman’s Wharf, Lombard Street, North Beach, Nob Hill and much of the Embarcadero,” the Chronicle noted.

“Through October, Central Station had seen 9,106 property crimes, a 13 percent increase from the same time period last year. Car break-ins are up 4 percent, and burglaries, which include home break-ins and shoplifting, are up a whopping 48 percent.”

Overall, the city is averaging 144 property crimes a day – only a slight drop from 2017.

Yet residents’ anger over the property crime epidemic goes far beyond the numbers and the criminals responsible. Letters to the editor and online posts show disbelief[3] at how few consequences there are for the break-ins. In 2017, only about 1 in 60 cases ended with an arrest. Even cases where stolen credit cards are used illegally – a crime that usually provides investigators with strong, clear evidence – rarely end in prosecution.

Failure to use signs to warn tourists blasted 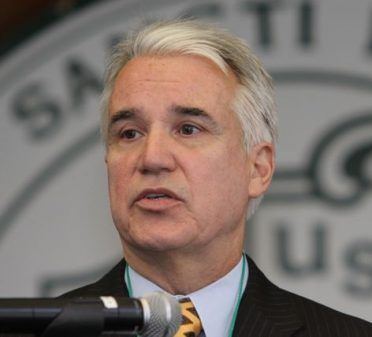 And citizens who try to help police report deep frustration and a belief the “smash and grab” break-ins are not taken seriously. In February, the NBC Bay Area television station interviewed[4] a car break-in victim who provided police with videos of at least 50 car breaks-in near his home, with none apparently leading to criminal prosecution. His frustration with the police was backed up by a spokesman for San Francisco District Attorney George Garcon (pictured) who said officers needed to make more arrests.

But the visitors industry – which generates $9 billion a year – is also frustrated[5] with Mayor London Breed and city supervisors. As Chronicle columnist Heather Knight wrote[6] recently, the best insurance against a vehicle break-in is having literally nothing of value in sight within a car – the everyday practice of locals who drive. Yet instead of getting this message across by requiring that car rental agents directly verbally warn[7] customers, the city merely requires that a warning be part of rental paperwork. Knight also called the city’s failure to put up warning signs at the most popular visitor sites “incredible.”

The national media has been reporting on the crime wave in San Francisco since 2017. In September, the “Inside Edition” show staged a sting in which valuables with GPS trackers were left inside a car at a tourist site. It was soon broken into, leading reporter Lisa Guerrero to later confront one of the two thieves.

But later that day, as Guerrero was interviewing a car break-in victim who complained about police indifference,  “a car belonging to the ‘Inside Edition’ crew was broken into, resulting in two broken windows and the theft of thousands of dollars’ worth of equipment,” according[8] to the show’s website.

Crime in San Francisco isn’t as severe in other categories, according to the FBI. The city had the 75th worst rate of violent crimes out of the 298 cities the agency tracked[9].