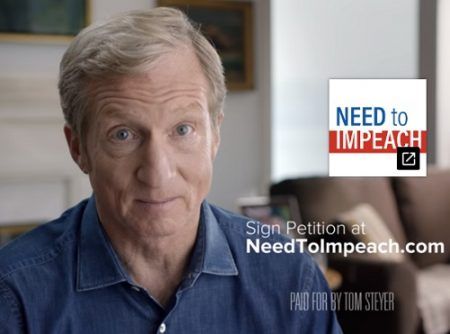 Signaling he’s very likely to run for president, Bay Area hedge fund billionaire and progressive activist Tom Steyer has begun searching for key aides to help him as he seeks the 2020 Democratic nomination.

A recent Linked-In ad was traced[1] by the New York Times to Steyer’s nascent campaign. ”A high profile political campaign based on the West Coast is seeking highly skilled political professionals to join our national campaign team,” it said. The ad sought state directors for New Hampshire, Nevada and South Carolina – the next three primary and caucus states after[2] Iowa kicks off the nomination process with caucuses on Feb. 3, 2020. A Steyer aide confirmed to the Times that he was responsible for the posting.

Steyer, 60, a former Yale soccer team captain who became a Californian after enrolling at the Stanford graduate business school, had a relatively low-key role in state and national politics until 2012. That’s when he handed over many of his financial responsibilities and began aggressively advocating for bolder environmental programs, among other causes.

This year, Steyer’s national profile has shot up after he spent at least $40 million[3] on a “Need to Impeach” cable and online campaign in which he stars in advertisements criticizing the conduct of President Donald Trump. The campaign has gathered more than 6 million signatures in an online petition[4] urging Congress to remove the Republican Trump.

Steyer could be competing for the nomination against as many as three other California Democrats: Sen. Kamala Harris, Los Angeles Mayor Eric Garcetti and Rep. Eric Swalwell of the East Bay area near San Francisco.

Harris has by far the highest national profile of the three, having won headlines as a member of the Senate Judiciary Committee during the confirmation hearing of Supreme Court Justice Brett Kavanaugh. In online prediction markets, Harris, Texas Rep. Beto O’Rourke and Vermont Sen. Bernie Sanders have all been[5] the leader to win the nomination at various points over the past two months.

Harris didn’t fare as well in the first CNN/Des Moines Register poll[6] of Iowa Democrats released over the weekend. Former Vice President Joe Biden led with 32 percent, Sanders was next with 19 percent, O’Rourke had 11 percent, Massachusetts Sen. Elizabeth Warren had 8 percent, with Harris in fifth at 5 percent.

But the former San Francisco district attorney can take solace in two facts. The first is that polls before the Iowa caucuses have a history of swinging wildly, and there is still more than 13 months until voting. The second is that African American candidates tend to do better in more diverse states than Iowa, which is 91 percent white[7].

While Illinois Sen. Barack Obama won the 2008 caucuses with 38 percent of the vote, that was among his 10 worst showings [8]in primaries and caucuses as he went on to win the nomination. In 1988, civil-rights activist Jesse Jackson got 8.8 percent[9] of the Iowa caucus vote versus the 29.4 percent he got in the overall Democratic nomination process as the runner-up to the nominee, Massachusetts Gov. Michael Dukakis. Jackson only fared worse in two other states[10].

In the Register-CNN poll, Steyer and Swalwell got 1 percent each. Garcetti was at 0 percent, receiving the fewest votes of any of the 20 listed Democratic candidates.