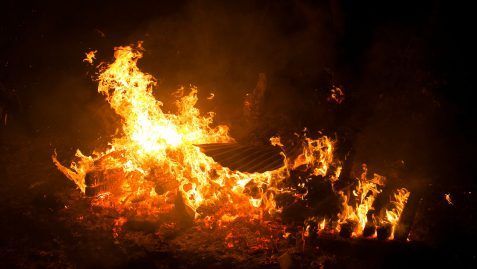 California Department of Forestry and Fire Protection Director Ken Pimlott retired last week but only after giving interviews in which he called for sweeping changes in how state officials and the public think about wildfire risks. He also challenged conventional wisdom on the state’s attitude about forest thinning and on who was most responsible for starting most fires.

Pimlott told the Associated Press that local and state planners should only approve[1] new housing projects in wilderness and canyon areas if far more efforts are made to guarantee there are easy evacuation routes and unless home fire defense measures are mandatory. He also called for much tougher building standards in so-called wilderness “interface” areas to make it more difficult for homes and commercial and government structures to burn.

“We’ve got to continue to raise the bar on what we’re doing, and local land-use planning decisions have to be part of that discussion,” Pimlott said.

His remarks were seen by some as a comment on Los Angeles County officials giving their final approval[2] last week to a 19,000-home project at Newhall Ranch near Interstate 5, about 70 miles north of the city of Los Angeles. Project opponents said the county didn’t go nearly far enough in imposing conditions that would reduce fire risks.

Pimlott also said more civil defense-type programs and emergency alarm systems are needed in communities in wooded areas. And he said the public in areas at risk of wildfires needed to take “red flag” extreme danger warnings far more seriously – not as a vague and unlikely threat but as an imminent personal risk.

At least if Pimlott’s warnings are taken seriously, the push for tougher building regulations in fire-prone areas will only make addressing California’s housing crisis more difficult. That’s because a mantra of housing reformers has been to reduce[3], not increase, state housing regulations to bring down costs. By some accounts, the Golden State has the nation’s costliest construction rules.

In an interview[4] with the New York Times, the retiring fire official said that President Donald Trump’s assertion[5] that poor forest management was behind the state’s awful run of monster wildfires since 2015 was misleading. He said state officials are hardly ignoring the problems caused by dead trees and thick undergrowth.

“Over the next five years, there’s over a billion dollars invested in both forest thinning and forest health projects,” Pimlott said.

Blame public, not stressed utilities, for ‘95%’ of fires

At a time when Pacific Gas & Electric and, to a lesser extent, Southern California Edison, have faced lawsuits seeking hundreds of millions in damages or more because of allegations that poorly maintained utility equipment triggered wildfires, Pimlott said there is an insufficient appreciation of how much bigger the fire threat is than just a decade ago.

“There has been negligence in some cases,” the 30-year firefighter told the Times. But he said that in most cases, “folks have complied with everything and you have winds that are blowing at 80 miles an hour, you have infrastructure that was never designed to function in these extreme conditions that we are now seeing.”

Who is most to blame for fires in the Golden State? Pimlott said the answer is the same that it’s always been.

“In reality, 95 percent of fires in California are caused by people – welding, grinding, pulling a car off the edge of the road, weeding at the wrong time of day,” he said.

Pimlott told the Times that he intends to spend much of his time in retirement on a 70-acre parcel in a heavily forested area in the foothills of the Sierra Nevada. The parcel was badly scorched by a 2014 wildfire.