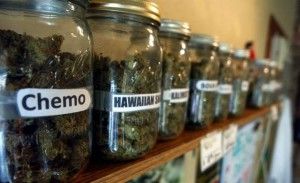 California’s first year with legal recreational sales of marijuana is wrapping up with a series of downbeat reports on a new industry struggling[1] to find its footing.

An Associated Press analysis posted[2] Sunday said estimated legal sales of cannabis would total just $2.5 billion in 2018 – in a state of 40 million people in which 13 percent of adults admit to use, significantly higher[3] than in most states. State officials will be lucky if they receive half the $630 million in pot taxes anticipated in the 2018 state budget.

When tax revenue goals went unmet early last year, one assumption was that this was primarily the result of resistance to legal cannabis. An estimated 80 percent of local governments have not authorized recreational sales, as is their right under Proposition 64[4], the 2016 ballot measure that cleared the way for such sales. And in some of the cities that have issued permits, only a handful have been issued.

But as the year wore on – and costly state regulations kicked in mandating careful testing and child-resistant packaging of marijuana and marijuana products, such as edibles – reporting on the California pot beat increasingly focused on the huge price advantage that illegal sellers have.

A recent Southern California News Group article[5] pointed out that with voters’ approval of medicinal marijuana in 1996, growers and sellers had a 20-year head start in establishing sales and distribution networks that were poised to fill demand when cannabis possession and use became legal on Jan. 1, 2018. These networks are able to sell marijuana that is up to 50 percent cheaper than the marijuana available in licensed stores.

These growers and sellers don’t just balk at going the legal route because of fees, regulations and paperwork. They’re emboldened by the weakening of criminal penalties related to marijuana in recent years, according to the Southern California News Group analysis.

A San Francisco Chronicle report[6] published last week quoted Steve DeAngelo, a co-founder of Oakland’s huge Harborside marijuana dispensary, as saying “the unrolling of legal adult-use cannabis has reinvigorated the underground market rather than curtailed it.”

“Because we are up against high taxes and the proliferation of illegal shops, it is difficult right now,” pot shop owner Javier Montes told[7] the Los Angeles Times last week. “We expected lines out of our doors, but unfortunately the underground market was already conducting commercial cannabis activity and are continuing to do so.”

Shop owners in the Los Angeles and Bay areas have urged authorities to crack down on illegal storefront and delivery sellers. But while state regulators say that is a priority[8] in 2019, it’s unclear how much of a priority it will be for local law enforcement agencies who are strapped by pension costs and often have difficulty maintaining police staffing because of recruiting woes.

Among those who anticipated that legal California sellers were going to be seriously undercut by illegal sellers is Gov.-elect Gavin Newsom, who led the Proposition 64 push.

While on the campaign trail in May, Newsom said[9] he thought it would take “five to seven years to substantively address the black market” issue.

As governor, Newsom could order stepped-up efforts to target growers and sellers, as well as seek new funding for such enforcement.

But the legal marijuana industry also wants help on another front. The Chronicle reported there is a huge backlog at the state office processing permits to legally grow marijuana, with no action yet on about 90 percent of applicants.