Strike or no strike, L.A. Unified in desperate financial shape 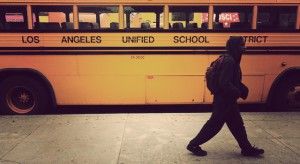 Leaders of the Los Angeles Unified School District, by far California’s largest school district, are struggling to head off a teachers’ strike that a state judge ruled Thursday [1]can begin Monday. United Teachers Los Angeles (UTLA), which represents 35,000 teachers, wants an immediate 6.5 percent pay hike and a two-year contract. L.A. Unified has offered a phased-in two-year raise of 6 percent as part of a three-year contract.

But while much of the focus has been on the chaos that’s likely if the district’s 640,000 students have nowhere to go Monday morning, the crisis is also drawing attention to the gigantic financial headaches facing the second-largest U.S. school district. Even if L.A. Unified sees its contract offer accepted, it’s on track for perpetual budget problems for as far as the eye can see because of its massive liabilities for retirement pensions and retiree health care.

Austin Beutner, the former executive and Los Angeles Times publisher who is the district’s superintendent, says UTLA refuses to acknowledge that the district faces a $2 billion shortfall over the next three years even if the district’s cheaper contract offer is accepted. That would wipe out LAUSD’s $1.8 billion reserve.

But union leaders, with 98 percent support among teachers for a strike, depict the $1.8 billion as money that can be tapped both for a bigger raise and for hiring more teachers and support personnel.

Writing [2]in the Times, Beutner sees the union’s refusal to ever make a counter-offer as a sign of a larger agenda. “UTLA leaders have said since early 2017 – before contract negotiations even began and more than a year before I became superintendent – that they wanted ‘a strike to create a state crisis,’” he asserted.

The hope is that such a crisis would lead the Legislature and Gov. Gavin Newsom to push for increased education funding. But it’s not clear if there’s much public appetite for paying higher taxes or using “rainy day” reserves for this purpose at a time when school funding has gone up more than 60 percent over the least eight years. School funding is $78.4 billion[3] this fiscal year, an increase[4] of more than $30 billion from 2010-11. On Thursday, Newsom proposed spending $80.7 billion for 2019-20.

Yet the tactic makes more sense as a reflection of union leaders’ drawing the same conclusion as Beutner about LAUSD’s grim fiscal path. The total cost of pensions and retiree health care for more than 36,000 former teachers is projected to double from 8 percent to 16 percent of the annual budget as mandatory payments to the California State Teachers’ Retirement system soar under the terms of the 2014 bailout approved by the Legislature. The bailout phases in a 132 percent increase in per-teacher contributions, with the final increase in 2020-21.

And UTLA also may have confidence it will be heeded in the Capitol, based on what happened in 2013 with the Local Control Funding Formula, which gives more per-pupil funding to districts with high numbers of English language learners, foster students and students from poor families. While the law [5]was touted by Gov. Jerry Brown as a way to help close the achievement gap by directing additional resources to individually help students, state Superintendent of Public Instruction Tom Torlakson’s 2015 ruling [6]that the additional funds could be used for teacher raises freed up school districts to ignore the original intent of the law.

About 510,000 of L.A. Unified’s students fit the criteria for additional state funding, vastly more than any other district in the state. But with few signs[7] the extra money is reaching English language learners in LAUSD, one theory heard in education circles is that the Local Control Funding Formula was more about propping up the district’s shaky finances than a principled attempt to directly help struggling students. UTLA is by far the most active and powerful local teachers union in California.

L.A. Unified’s fiscal problems were laid out[8] in 2015 by a panel of experts brought in to examine district finances. They concluded drastic steps needed to be taken to address the combined problems of declining enrollment and increasing pension and health care costs. But the district has not followed through with work force cuts or with attempts to collectively bargain for changes in employment contracts that give teachers lifetime health care benefits for themselves and their spouses – one of the most lucrative and costly benefits in California government. The panel said without huge changes, LAUSD was headed for bankruptcy.