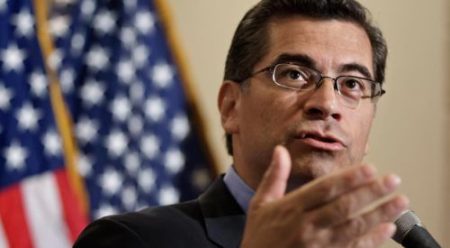 Another Democratic state attorney general is facing sharp criticism from activists for allegedly getting in the way of criminal justice reform and showing bad faith while doing so.

Former Rep. Xavier Becerra (pictured), D-Los Angeles, was appointed in 2016 by Gov. Jerry Brown to replace state Attorney General Kamala Harris after she was elected to the U.S. Senate. He won a full term in the 2018 elections.

While Becerra joined Brown in backing measures that made the criminal justice system less punitive, he has come in the cross hairs of activists for his interpretation of Senate Bill 1421[1], which took effect Jan. 1.

The measure, by state Sen. Nancy Skinner, D-Berkeley, wipes away decades of protections of police discipline records that were adopted by past lawmakers and upheld by courts. It mandates the release of such records if they involve life-threatening or lethal use of force, sexual misconduct and lying in the execution of official duties.

Last year, however, police unions began arguing that Skinner’s law only applies to disciplinary records generated after it took effect Jan. 1 – not to past reports of discipline. However, on Jan. 2, the California Supreme Court denied[2] an emergency request for a delay in implementing the law pending a full review of how the law should be interpreted. This was seen by legal observers as a plain sign that state justices agreed with Skinner, who said the retroactive intent of her law was clear.

These rulings were cited earlier this month by Supervising Deputy Attorney General Mark Beckington in rejecting a public records request for discipline records of law enforcement agents who work for Becerra.

In an interview[3] with KQED, the Northern California PBS affiliate, the executive director of the California First Amendment Coalition blasted Becerra for his department’s decision, saying it sent the wrong message to local agencies and reflected a failure of leadership.

“This is the highest law enforcement officer in the state. He has decided not to disclose records that I think the new law makes very clear should be disclosed,” David Snyder said.

Skinner told KQED that the attorney general’s decision was “puzzling” given that several state law-enforcement agencies complied with the law once it took effect.

But Becerra has rejected[4] criticism, saying that on privacy issues – especially those involving law enforcement officers – he would err on the side of caution.

The controversy has echoes of criticism[5] facing Sen. Harris, the former San Francisco district attorney, as she has launched her bid for the 2020 Democratic presidential nomination.

In her new autobiography, “The Truths We Hold,” and in speeches to progressive groups, Harris has depicted herself as an aggressive advocate of the view that the criminal-justice system is overly punitive and particularly harsh on some minority groups.

But University of San Francisco law professor Lara Bazelon says that doesn’t square with her record as San Francisco DA and state attorney general. In a commentary for the New York Times, Bazelon wrote[6] that Harris was willing to use evidence she knew to be tainted to obtain convictions.

Other reformers have focused on her refusal to support[7] Proposition 47, the 2014 ballot measure that limited prison time for nonviolent crimes, and her opposition[8] to legislation that would have mandated her office conduct independent investigations of fatal police shootings.

Harris’ defenders say this amounts to cherry-picking that ignores key parts of her record. They note she supported a pioneering program[9] in San Francisco that provided resources and counseling to keep first-time drug offenders from ending up in a life of crime. They also note that as attorney general, her agency was the first[10] in the state government to require that its law-enforcement agents wear body cameras.

It’s unclear when the dispute over police discipline records will be resolved. But since lower state courts have reached different decisions on how to interpret Senate Bill 1421, that normally means the issue won’t be resolved without a California Supreme Court ruling.