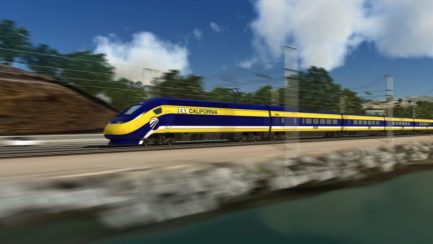 The battle between California and the Trump administration over $3.4 billion in federal funding that was committed nearly a decade ago to the state’s bullet-train project escalated[1] last week when a key state leader rejected federal criticisms of the project’s progress.

California High-Speed Rail Authority Chief Executive Brian Kelly sent two letters defending Gov. Gavin Newsom’s January remarks that he would focus on completing a 119-mile segment now being built in the Central Valley – backing away from a promise to state voters in 2008 and to the federal government in 2009 and 2010 to build a statewide bullet-train system. Kelly said the state was comporting with key federal regulations.

The limited segment linking Bakersfield and Merced is expected to cost up to $18 billion. Were it ever built, the costs of the originally envisioned statewide bullet-train system – ranging along the coast from San Francisco to Los Angeles to San Diego and inland to Sacramento – could have been 10 times as much or more. The cost of each end of the Los Angeles to San Francisco segment was so extreme that in 2012, the rail authority gave up[2] on true high-speed rail in those links – opting for a “blended” system that relied on regular rail to cover the final 45 miles or so into each of the population centers.

The Trump administration has already canceled a $929 million grant issued to the project in 2010 by the Obama administration. It has indicated it hopes to recover $2.5 billion the federal government has already allocated to California as part of the 2009 economic stimulus package on the grounds that the project is far behind schedule and no longer meets promises of sound planning and financial viability made to secure the $2.5 billion.

“Any clawback of federal funds already expended on this project would be disastrous policy,” Kelly wrote. “It is hard to imagine how your agency – or the taxpayers – might benefit from partially constructed assets sitting stranded in the Central Valley of California.”

Kelly’s letter hinted at but did not explicitly suggest the DOT’s attempts to recover the $2.5 billion were motivated by President Donald Trump’s two-year-plus war of words with California’s governors, which began under Jerry Brown and has continued with Gavin Newsom. In that span, state Attorney General Xavier Becerra has filed or joined in nearly 50 lawsuits against the Trump administration. Newsom has called[3] the targeting of California’s project politically motivated.

Kelly’s argument that the “clawback” of that much in federal funds would be unprecedented appears correct. But the state’s arguments are weakened by the difficulty it will face in asserting it acquired the federal funds while acting in good faith. Despite telling the U.S. Department of Transportation repeatedly, beginning in 2009, that the bullet-train project was in good shape financially, rail authority officials couldn’t persuade state watchdogs that was the case in the same time frame.

In January 2010, the Legislative Analyst’s Office warned[4] the authority didn’t have a legal business plan because it anticipated that revenue or ridership guarantees could be provided to attract private investors to help fund the project. Because such guarantees amounted to a promise of subsidies if forecasts weren’t met, they were illegal under Proposition 1A[5], the 2008 state ballot measure providing $9.95 billion in bond seed money for the then-$33 billion project.

The LAO and the California State Auditor’s Office have been uniformly critical of the project for a decade.

If the Trump administration takes steps to recover the $2.5 billion by withholding unrelated federal dollars bound for California, the dispute seems certain to end up in federal court.

Meanwhile, the California congressman whose district has arguably been most affected by early construction of the bullet train on Thursday introduced a bill[6] that would “repurpose” all $3.4 billion in federal funds for the project to water infrastructure projects in California and other Western states. The measure by House Minority Leader Kevin McCarthy, R-Bakersfield, faces long odds in a chamber in which Democrats retook control in January.